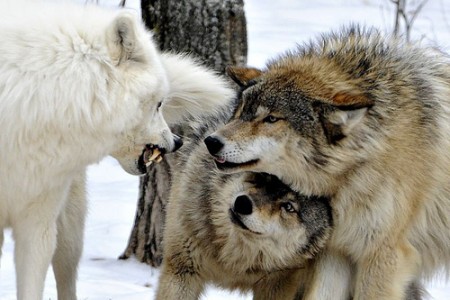 A wolf management bill that won swift and overwhelming bipartisan support in the Montana Legislature was signed into law today by the state’s new governor.

Gov. Steve Bullock said the law, sponsored by Rep. Kelly Flynn, will allow hunters to purchase up to three wolf licenses and lowers the price of a nonresident wolf license from $350 to $50.  The measure will also fortify state wildlife officials’ science-based efforts to manage Montana’s recovered and growing wolf population, the Governor said.

“This legislation leaves management of the gray wolf where it belongs, in the hands of scientists, not politicians,” Gov. Bullock said.

The legislation was amended by law makers to allow hunting and trapping of wolves near national parks and allows wildlife officials to close such areas after established wolf harvest quotas are met.

In signing the legislation, Gov. Bullock asked FWP to ramp up education programs aimed at averting the harvest of collared wolves near national parks.

Gov. Bullock also directed his staff to determine the best way to reengage the wolf advisory council.  The council was originally formed to lead the state’s productive wolf conservation and management plan discussions more than 12 years ago.

The new law also allows for wolf hunters to use their license after 24-hours of purchase, instead of a five-day wait; authorizes the use of electronic calls ; and removes the requirement for wolf hunters to wear hunter-orange clothing after the general deer and elk hunting seasons have ended.

The recovery of the wolf in the northern Rockies—an area generally comprised of wolf populations in Montana, Idaho, and Wyoming—remains one of the fastest endangered species comebacks on record. The recovery goal for wolves in the three states was set at a minimum of 30 breeding pairs—successfully reproducing wolf packs—and a minimum of 300 individual wolves for at least three consecutive years. In the mid 1990s, to hasten the overall pace of wolf recovery, the U.S. Fish and Wildlife Service released wolves into Yellowstone National Park and central Idaho. By 2002 the recovery goal was reached and the wolf population has increased every year since.