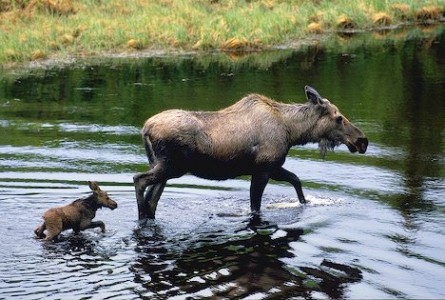 The Butte Standard reported two 15-year-old teens were sentenced in Deer Lodge justice court on Friday for killing a moose out of season near Avon.  They pleaded guilty to attempting to take a large game animal, a cow moose, during closed season.

The boys, one from Deer Lodge and the other from Avon, Judge JoAnne Nelson sentenced each to pay half of the $1,000 restitution for the moose and fined each $535. Their privileges to hunt, fish or trap have been suspended for 24 months.

On Feb. 18, a cow moose died from two gunshot wounds from a .223-caliber rifle in the area of Carpenter and Ophir Creeks northeast of Avon. The cow had a yearling with her and was also carrying a calf that would have been born this spring.

“This was a heinous act and these two young men showed complete disregard for wildlife and wildlife laws,” Kambic said. “Both have taken full responsibility for their actions and for the most part have complied during the investigation.”

Although this is a potential felony with many violations, Kambic said he cited each for a misdemeanor because they are kids who did a dumb thing. He said he hopes they have been taught a lesson.

The boys aren’t being named publicly since they’re juveniles.

Public donations in late February bumped the reward amount from the original offering of $1,000 to $2,000 for providing tips that lead to a conviction in the case.

Kambic, said in a previous interview that while both he and the state’s telephone tip line got a lot of calls, those weren’t what led to the charges against the boys.

When the boys were ticketed, Kambic said the press coverage likely drew in public interest in the case.

“Moose are one of those iconic animals that everybody likes and people hated to see this happen.”

Citations came as a result of the investigation, that included a $2,000 reward for information, Kambic said.

Full story as reported by Butte Standard can be found HERE.