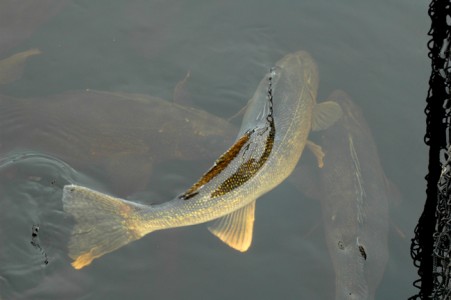 Last week, Montana Fish, Wildlife and Parks (FWP), in Region One, came out with a press release that, undoubtedly, has not been received well with walleye anglers that fish Noxon Rapid Reservoir. FWP is seeking public comment for the Investigation of Suppression of Walleye this 7500 acre reservoir in Western Montana.

The reservoir currently supports fisheries for smallmouth and largemouth bass, yellow perch, and northern pike. The walleyes were first documented to be in the reservoir, by FWP in 1991, as a result of several illegal stocking events according to the agency. Then, in 2000 FWP started annual standardized gill netting and confirmed that the walleye population was established and naturally reproducing.

Walleye anglers have had success catching fish in recent years; needless to say they are not very happy about a proposal to conduct a 6-year effort beginning this spring to investigate suppressing walleye in Noxon. In the FWP Draft Environmental Assessment to Investigate Suppression of Walleye, (available on line at www. fwp.mt.gov under public notices), there a number of reasons given for the agencies action. First, and foremost, is that walleye was illegally introduced, and, according to Montana’s illegal and Unauthorized Introduction of Aquatic Wildlife Policy, “if the Department determines that removal maybe feasible it shall attempt removal at the earliest possible date”.

Many walleye anglers that I have spoken with, that fish the reservoir, would like to see walleyes included in the management plan for Noxon, just like they are a part of the Canyon Ferry Reservoir/ Upper Missouri River management plan. In the late 1990’s Canyon Ferry Reservoir, which is one of the top most heavily fished waters in Montana, became a popular walleye recreational fishery.

As is the case with Noxon, it was believed walleyes were illegally introduced into Canyon Ferry in the 1980’s. Instead of suppression FWP decided to manage walleyes along with the trout and perch fisheries. According to FWP back in 2000, the large 1996 and 1997 year classes of walleye were large enough to effectively prey upon stocked rainbow fingerlings, and rainbow numbers declined in subsequent years. So, FWP started to stock larger sized, 8-inch fish in the spring and fall which increased rainbow recruitment, resulting in an upward trend in recent years.

Following walleye population expansion, it was found that stocking larger sized fish in the Spring and Fall is necessary to avoid predation. Stocking trout in the Fall also took advantage of lower energy demands of walleye during cooler water temperatures. The FWP management plan is working on Canyon Ferry. In summer 2008, 28.4% of anglers were fishing for walleye exclusively and 43.6% were targeting walleye in combination with some other species, such as trout according to the agency.

More anglers catching fish on Canyon Ferry also has meant more business for the area merchants. Needless to say, walleye anglers would like to see the success that FWP has had with their management plan on Canyon Ferry duplicated on Noxon Rapids Reservoir.  Your comments are encouraged by FWP through March 29th.