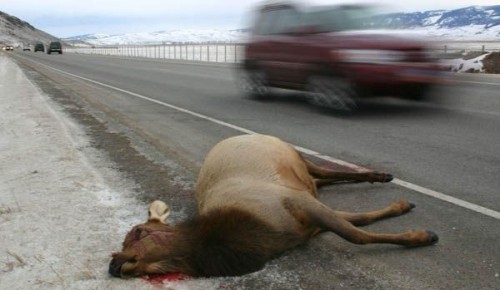 Nine Steps to Your First Roadkill Meal
By angelamontana

With the recent Montana roadkill law passed, that allows people to consume deer, elk, moose and antelope that they hit with cars, there might be some people who are uneasy just thinking about eating the meat from these unfortunate accidents.

According to wikiHow.com, there are nine steps that you should take when preparing to eat roadkill.

1.  “Overcome Your Squeamishness” – a lot  of people have  hard time with the idea, but you can also look at consuming roadkill meat as being “environmentally responsible and considerate way to dispose of animals killed on our many roads”.

2.  “Investigate the Possibilites” – talk to people who have consumed roadkill in the past, and they can give you tips on how to assess good roadkill and prepare it safely.

3.  “Know which Animals are Probably the Most Suitable” – for people in Montana, the legal consumption of roadkill animals is limited to deer, elk, moose and antelope.

4.  “Know the Law” – some states deem it legal to consume roadkill, while others may have limitations on the type of animals that can legally be consumed.  Some states may also require permits and may have seasonal bans on certain roadkill animals.

5.  “Learn the Signs of Healthy Roadkill” – this can be determined mostly by common sense.  The following tips can help you determine if the roadkill you found is healthy enough to consume:

* “Look for freshness” – witnessing the animal being hit is obviously a sign that the animal is fresh;  Clear eyes are also a sign;

* “Use the temperature as a guide” – In winter, meat will stay fresh longer

* Avoid roadkill that has maggots and flies in or on it, but fleas on the hide are a sign that the meat should still be good

* If it smells like rotting flesh, then don’t eat it.

* “Look for whole roadkill” – if it has been flattened or needs to be scraped off the road, it probably isn’t a good idea to consume it.  Also, be sure to look for the roadkill that is on the shoulder of the road, as opposed to the middle of the road.

* Don’t eat any roadkill unless you are sure it is fresh.  It isn’t worth the risk!

6.  “Avoid Getting Rabies” – Be sure to wear gloves when handling the meat as to avoid exposure to parasites and diseases.

7.  “Butcher the Carcass” – Be sure to field dress the carcass just as you would if you shot it. Also, remember that organs spoil quickly, so do not eat them unless you are certain the meat is fresh.

8.  “Cook the Meat Thoroughly” – Be sure to cook the meat at a higher temperature than normal to be sure that any pathogens, worms, parasites are killed off.

9.  “Bless Your Roadkill” – This is subject to the personal opinions of each person, but some believe that “by eating roadkill you’re making the most of a terrible outcome from the animals’ perspective, and the least the animal deserves is your compassionate blessing.”  To each their own.

Overall, assessing the freshness of and consuming roadkill is a matter of common sense, and you just need to be confident the meat is fresh.  There are also several “roadkill recipes” on the internet out there that can give you ideas on how to prepare you roadkill meat.  Additionally, the wikiHow.com suggests you also heed the following warnings: