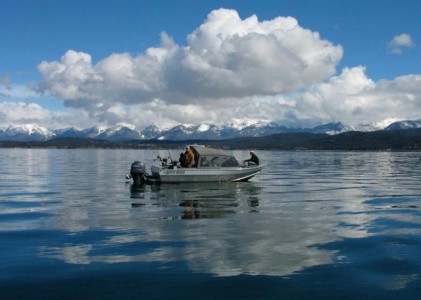 Spring Mack Days anglers have turned in 12,002 lake trout entries in the first 12 days of the 2013 Spring Fishing  Event on Flathead Lake.  That total is just 145 entries short of the same number of days in the 2012 Spring Event which was the largest event so far in the Mack Days competitions. Fourth weekend total was 3,403 lake trout entries.

Susan Martin of Polson continues to lead the ladies with 101, second place Nicole Peters of Missoula with 73, Julie Vacca of Florence has 71, Tracy Powers of Missoula-55, and Alyssa Hadley-Kalispell with 7.

The youth anglers in the event are making a race of it with several of them totaling 100 or more entries. Adult anglers in some boats are losing ground as these young anglers are becoming better and better lake trout anglers.  Garett Vaughan leads the youth anglers with 227 entries in the 12 & under category.  Following is Matt Guckenberg Jr. with 30,  Cole Gilleard of St. Ignatius has 24, Abby Hodgson of Kalispell-9 and Dylan Hodgson-7.  The 13-17 category leader is Danner Shima of Kalispell with 175, Connor Kowalski is second with 131,  Kobe Cox of Charlo has 106, Tanner Murry-Columbia Falls-96, and Brady Weible of Charlo has 57.

Entries continue to be taken until the last day of the event.  Go to www.mackdays.com for more information and be sure and check out the educational videos on lake trout jigging, trolling, and dock fishing that have been developed by the Confederated Salish and Kootenai Tribes.  We hope to have copies available soon for distribution.  Telephone 406-883-2888 ex. 7294 for information.