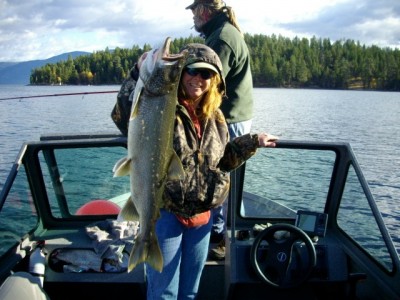 Jason Mahlen continues his lead in the 2013 Spring Mack Days Fishing Event with a total of 993 lake trout entries at the half way mark of the event.  Friday was a stellar day for the Kalispell angler with 80 lake trout entries.  Saturday and Sunday weather hampered even the best angler with his totals for those days being 32 and 35. His 18 day average is at 55 fish per day.  Steven Benson of Four Lakes, Wa. is holding onto second with 591 and a thirteen day average of 33.  Mike Benson of Lonepine is third with 568 and a 32 for an eighteen day average. Fourth place is Craig Morigeau of Polson with 551.  Craig has an average over 13 fishing days of 42. Scott Mahlen had a good day and out-fished his brother for the first time in two years on Saturday and has a total of 533 and 31 day average for seventeen days.  The top ten anglers are placed by their best eighteen day average at the end of the event. Only three anglers-Jason Mahlen, Mike Benson, and Steve Benson have fished the first eighteen days straight.  Once an angler has eighteen days they have to come in with a better day than their lowest of eighteen to receive a ticket for that day.  Bonus amounts continue to go up every day but ticket entries are limited by the eighteen day average.  Sixth place is held by Danny Smith of Hot Springs with 469, seventh place-Bryan Long of Columbia Falls with 406, Jerry Benson of Plains is eighth with 372, David McDaniel of Polson ninth with 342, and Dean Vaughan of Charlo is tenth with 340.  If you follow the stats of the event you will notice that Garett Vaughan has an entry of seven fish on Saturday with the boat coming in early.  Dean must have run out of bait or something? It was rough on the water both Saturday and Sunday.  Wind, waves, rain, snow, and iced up lines are taking a toll on the anglers but they still continue on.

Mack Days Fishing Events are sponsored by the Confederated Salish and Kootenai Tribes and are sanctioned by Montana Fish, Wildlife, and Parks.  Up to $150,000 in cash and prizes will be awarded to anglers at the conclusion of the event.  Entries are taken up until the last day of the event.  One entry is all it takes to be part of the lottery style drawing that begins at $1,000 and goes down to $100.

Saturday was one of the three days of the event that anglers could turn in four specific fish to be weighed in a bucket and compete for the $200 Heaviest Bucket Prize.  First place with a bucket of fish weighing 18lbs. 10ozs went to Brandt Hammernick of Missoula for his bucket of four lake trout.  Second place went to the McDaniels/Martin team with 17lbs. 6oz.  Third place Guillory/Guillory with 16lbs. 10ozs. and fishing from shore and turning in a bucket of fish weighing 16lbs. 7 ozs. was lady anglers Kathleen Bell and Julie Duncan.  Fifth place goes to the team of Johnson/Hoover with a bucket at 13lbs. 15 ozs.  The next and last Heaviest Bucket Days is Sunday May 5th.

Susan Martin of Polson is leading the ladies with 143 followed by Nicole Peters with 123, Julie Vacca-Florence with 109, Tracy Powers-Missoula-55, and Deana Knipe of Polson with 28.

Garett Vaughan-Charlo leads the 12 & under with 241 and Danner Shima-Kalispell is leading the 13-17 with 194.  Matt Guckenberg of Kalispell follows Garett with 46 and Cole Gilleard of St. Ignatius comes in with 31.  Connor Kowalski of Florence comes in behind Shima with 131 and Kobe Cox of Charlo is third with 106.

The Confederated Salish and Kootenai Tribes have developed a lake trout fishing DVD that shows tips and techniques for fishing Flathead Lake’s lake trout fishery.  The DVD’s are available at the Natural Resource Office in Polson, at the Blue Bay Mack Days Headquarters or fish pickup sites during the event, or you can telephone 406-883-2888 ex.7294 to receive a copy.