A Look At Trap Guns With Colonel Smoothbore
By OutdoorAly

Let’s take a look at some shotguns of trapshooting. For singles and handicap any good shotgun capable of reliably firing one round will work. For doubles, one needs a repeater, preferably an over-under or a semi-auto. Pump guns will work in doubles, but the shooter must be quite accomplished at manipulating the slide.

There is a subset of shotguns known as “trap guns.” These are discipline specific, in other words their sole purpose is the breaking of clay targets in trap shooting events. This subset can be broken down even further into “singles” guns for singles and handicap, and “doubles” guns. There are “combo” sets that have both a single barrel (singles and handicap) and an over-under barrel for doubles. 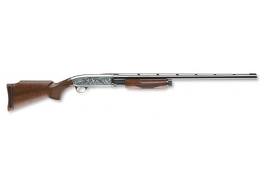 Most competitive shooters use some form of hinged or break action shotgun. The single barrel guns usually have very long barrels (30 to 34, even 35 inches); are chambered for 2 ¾ inch 12 gauge shells only; are quite heavy, up to 12 pounds; and most have some stock adjustments to fit the gun to individual shooters. A great example of a single barrel trap gun is the Browning BT 99. At some time in their careers, a lot of trap shooters have owned a BT 99 and over the years, I’ve owned two. The guns are nearly indestructible and as trap guns go, quite inexpensive. One will find many BT 99s at trap shoots all across Montana and the US and Canada. It is probably the most popular single barrel trap gun.

While one doesn’t see many pump guns in the tournaments nowadays, there are still a few Winchester Model 10, Remington Model 870, and Browning BPS trap guns in use. My experience has been that the owners of these guns have been shooting them for a long time and are really good trap shooters. One of my friends, Montana State Champion and Hall of Famer Lewis Hill, has used the same Model 10 for about 40 years.

Next week we’ll look at semi-auto trap guns and maybe begin a short study of the custom guns available for trap shooters.

Smoothbore Shooting School has a NRA Basic Shotgun Shooting Course scheduled in Missoula for the weekend of April 26-28. Preregistration is required. There are several spots open, but the courses usually fill quite quickly. If you are interested, just go to www.guncoach.net, and check out the courses page. If you have questions or wish to sign up for the class, just use the contacts page.