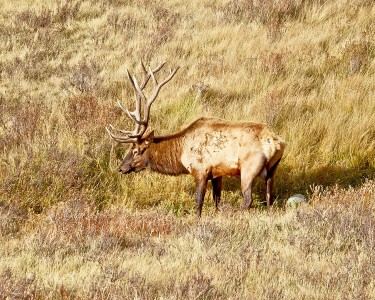 (photo courtesy of brucejbarkeroutdoorphotography.com – No. 10)

An article on billingsgazette.com, by Brett French, stated that an “internationally famous Yellowstone National Park bull elk has died, likely killed by the Canyon wolf pack”.

The article stated that the famous elk, known as No. 10 because of his numbered ear tag, was found dead in Wraith Falls of Yellowstone National Park.  The bull’s carcass was discovered being fed on by the infamous Canyon wolf pack on Saturday.

According to Al Nash, Public Affairs Chief of Yellowstone National Park, the bull was estimated to be between 16 and 18 years-old.  Nash recalled that No. 10 and his rival, No. 6, were known, during the fall rutting season, to “spar with each other”.

(photo of No. 6 courtesy of Ken Meyer)

Unfortunately, the 15 year-old No. 6 died, back in 2009, after being tangled in a barbed wire fence and falling on his back, ultimately suffocating.  Boone and Crockett scored this massive bull at a whopping 356 5/8, and he weighed in at 725 pounds.

No. 10 will be missed, as he was a regular in the Mammoth area where, according to Jim Halfpenny, a Gardiner-based naturalist, the bull “held court”.

For more information on the story of No. 10, check out the original Billings Gazette article by clicking HERE.