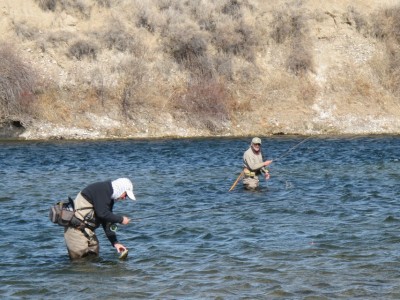 Brown trout numbers have soared on the Bighorn River in south-central Montana, thanks to previous wet years.  According to the Department of Fish, Wildlife and Parks, surveys conducted last year on the upper river showed it held about 8,000 fish per mile.  That figure includes about 2,900 brown trout 9 inches or larger per mile and about 1,300 rainbow trout 9 inches and larger per mile.  Adding in smaller fish brought the total up to 8,000.

Looking ahead, the Bighorn Reservoir, which supplies the river with water, is 86 percent full but a low mountain snowpack isn’t very promising for a boost from spring runoff. Typically, April and May are wet months, but so far drought conditions have prevailed. With less water, the river’s fish become more crowded and young trout lose the side channels they need to avoid being eaten.