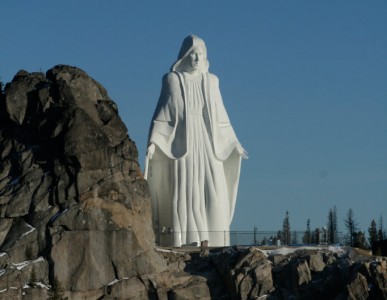 Butte Montana From the Air
By OutdoorAly

Skies were blue, winds were calm, and I had a craving for a pasty. What better time to visit Butte America, Montana’s pasty central? The flight from Missoula was smooth as could be and Butte airport was kind enough to loan us a car. Unfortunately our hunt for an authentic Butte pasty ended shortly after finding the two recommended restaurants closed on Sunday. But we found some alternative grub at Sparky’s Garage uptown Butte, did some site seeing, and enjoyed the sunshine! It was awesome to see some of Butte’s famous landmarks from the air. Take a look!

Our Lady of the Rockies is a 90-foot statue placed on the East Ridge overlooking Butte. The structure, built entirely by volunteers and maintained by a non-profit organization, was begun in 1979 and completed in 1985. The statue was built in sections in Butte. In the fall of 1985, 400 tons of concrete were poured for its base. In December, members of the Montana National Guard, the Army Reserve and teams of civilian workers cooperated as the statue was lifted to the site in sections by an Air National Guard team from Nevada, using a Sky Crane helicopter.
At the statue site visitors are able to go inside the towering metal structure. Our Lady of the Rockies is dedicated to women, regardless of religion. 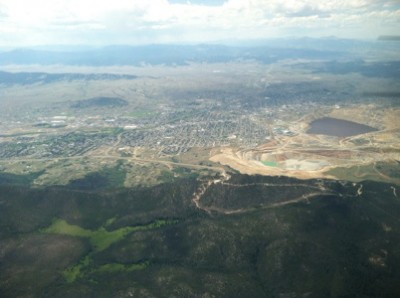 The Berkely Pit, started in 1955, was a large truck-operated open-pit copper mine until mining ceased in 1982. By 1980 nearly 1.5 billion tons of material had been removed from the pit, including more than 290 million tons of copper ore. The pit enabled Butte to claim the title The Richest Hill on Earth.

Two communities and much of Butte’s previously crowded East Side were consumed by land purchases to create the pit. The Anaconda Mining Company bought the homes, businesses and school of the working-class communities of Meaderville and McQueen, east of the pit site.

The pit is 7,000 feet long, 5,600 feet wide and 1,600 feet deep from the high wall on the north side just below the Kelley mine. Present day visitors can view the mine from a platform located above it. The viewing stand offers a look at the Berkeley Pit, which is filling with water.

The area surrounding the pit is still being mined and dump trucks are unloading around the clock. Check these giant beasts out in the next photo, there is a school bus parked in the lot that shows the scale.

Elk herd in their winter range on top of Mount Jumbo pictured below.

A beautiful view of Snowbowl ski area and Grant Creek as we prepared for landing.