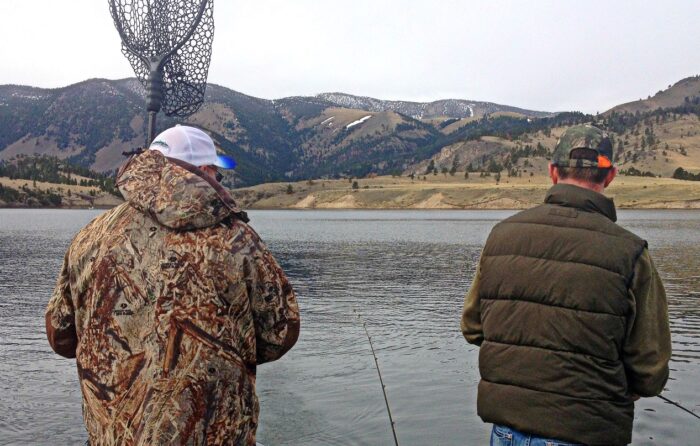 Despite Colder Temps, there are some Excellent Fishing Reports: Captain’s Column
By angelamontana

Finally warmer spring weather has moved into Western Montana. It is not exactly a heat wave but compared with what we have been experiencing lately with snow showers, cold winds and below freezing temperatures, it is nice to see higher daytime temperatures. Despite the colder weather I have received some excellent fishing reports from throughout Montana.

Browns Lake has been ice free for a couple of weeks and boat and shore anglers are doing well according to Bill Brown from Bob Wards in Missoula. Boat anglers are trolling a couple of colors with a long leader and a clown colored needle fish. Leach pattern fly also works well on the lake. The shore anglers are fishing for the trout that are near the shoreline on the south end of the lake.

The perch bite in east Polson Bay on Flathead Lake should be going strong once the water starts to warm up in the 50’s as the perch coming into about 4-6 feet of water to spawn.

Chancey Jeschke from Snappy Sport Senter in Kalispell had this fishing report on the Montana Outdoor Radio Show, “I have been getting good reports from Hubbard Reservoir producing rainbows and occasional kokannee. Most guys are bait fishing using worms, marshmallows, and power bait. Over east on off the mountain the west end of Duck Luck was open and folks are dry Fishing. Lake Francis by Valier is open for walleye and northern pike.

Shelby from the Rocky Mountain Supply reports that Clark Canyon Reservoir is the place to be. “I talked to some anglers that fished the lake and they just hammered the trout with worms and Colorado spinners. The Big Hole River by Dillon is also fishing great using skwalas with a purple tint.

Scott Anderson from the Montana Fishing Company reports that Noxon Reservoir should start fishing well for northern pike once warmer weather settles in the area.

Speaking of Noxon, this Friday and Saturday, April, 26- 27th, members of the Noxon Warm Water Fisheries Association are having a Spring Fling that will include a walleye fishing derby and barbeque.  This would be a great event for anglers to attend that would like to learn more on how to go about catching walleyes in Noxon Reservoir. You can bet that there will be some good walleye fisherman sharing their fishing techniques and locations of where to fish for walleye on the lake. The derby is limited to 30 participants or 15 two person teams. Sign up and rules meeting will be at the Lakeside Motel and Resort in Trout Creek from 6-7pm Friday evening April 26, entry fee is $40 per team. The fishing derby will start at 8am Saturday and end at 2pm. It is a catch and release tournament with all fish being released. At 6pm on Saturday, at the Lakeside Motel, there will be a barbeque with raffles, silent auction, and giveaways. One of the prizes to be given away will be a guided fishing trip with Professional Fisherman Dale Gilbert. All the proceeds will go to the Sanders County Sherriff Relief Fund. For more information contact John Harris at the Lakeside Motel (406) 827-4458.

(Report by the Captain)