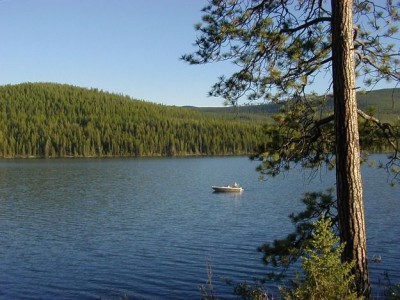 Chancy from Snappy’s
Chancy at Snappy’s says the ice is all gone. Hubbard Reservoir been producing rainbows and kokannee. Most guys trout fishing from the shore bait fishing. Beaver Chain Lakes kind of the same thing, bait fishing off the shore out of Whitefish about 10 miles. Murray Lake, Beaver Lake, and Little Beaver Lake they’re all doing really good. There are some nice really big fish in there. Bitterroot Lake sounds like it’s all open. No reports on kokannee yet, but folks been fishing it for rainbows. McGregor Lake doing pretty good fishing for rainbows. Perch fishing East Bay is still doing well. Echo Lake been hit pretty hard for bass, perch, and pike. Croppy fishing McWinneger Slough, just past Snappy’s, been producing bass, perch, and some nice pike. Church Slough off the Flathead River is open now, so you should be able to put in a small boat. The main boat launch may be blocked, but you can put in a small boat in there off the river. Sounds like the pike are starting to bite. Nice reports on Kookanusa, for kokannee for those vertical jigging, and some trout for those trolling. River fishing been slow it’s a bit high and murky, but should be clearing up before too long.

Leonard from Roberts Bait and Tackle
Leonard from Robert’s Bait and Tackle says despite the snowy weekend folks are still going out. The ice is gone now all over. Fishing wise, folks been picking a few walleyes up on Holter. Haven’t heard a lot on Piscan & Bynum. Francis been a couple boats, but been pretty slow with the lake way down. Tiber’s been hit and miss. Down below the dam quite a few trout being caught down there. Riverwise, reports are good for sauger, bass, and a few sturgeon. If you have any questions or need rod & reel repair call Leonard 406-454-1877.

Shelby from Rocky Mountain Supply in Dillon
Shelby from Rocky Mountain Supply in Dillon says he went out to the Beaverhead and be aware of the fishing regulations for where you are at. Shelby had a couple guides tell him the squallas dry and chubby chernobyl the purple and brown patterns are just hammering the fish in the big hole. The wooly buggers in the Beaverhead have been producing. All the ice is off the lake. Reports of the best for ling is around the East side of the island, and most of the people catching trout are down around the South side of the lake. If you’re in the Dillon area, stop into Rocky Mountain Supply for more information or call 406-683-2308.