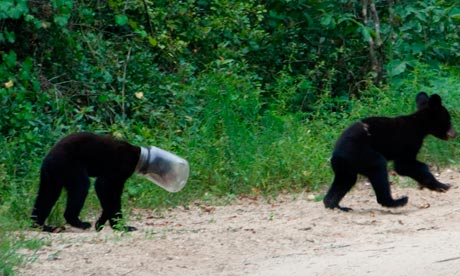 The “Jarhead” Bear Epidemic
By angelamontana

According to an article posted on the New York Daily News website (www.nydailynews.com), a six month-old black bear cub, in central Florida, was “rooting around” in some garbage, back in 2010, and got his head stuck in a jar.  He was, then, dubbed “Jarhead” after being discovered.

Apparently, the bear cub and its mother, along with two other cubs, had been spotted for eight consecutive days in the area by residents, but they managed to avoid getting caught in the FWC’s traps and disappeared for two days.  Just as the attempted rescuers feared the cub had starved to death, the trio of bears appeared again.

After tranquilizing the mother, the team of rescuers eventually removed the jar from the cub’s head.  According to the FWC, the bear lived up to its US Marine Corps name and put up quite the fight during the rescue. 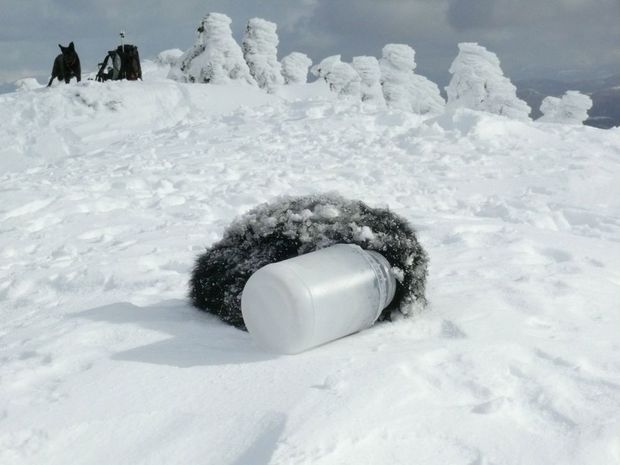 Pictured above, another bear cub, in March of 2012 in Ketchikan, Alaska, got his head stuck in a jar in 2012, and a hiker, Keve Schuler, happened to find him curled up like this.  Fortunately, Schuler was able to free the cub.

Unfortunately, this is slowly becoming an epidemic, and keeping garbage in bear-proof containers is important in preventing these occurrences from happening in the future.  It is a good thing that the cubs pictured above were freed before they starved to death or died of thirst.

If you see any animal stuck in this situation, or a similar situation, please report it to your local Fish and Game Warden ASAP.  Note the area you last saw the animal, especially GPS coordinates, if possible.  In Montana, visit http://fwp.mt.gov/doingBusiness/contactUs/ for contact information.