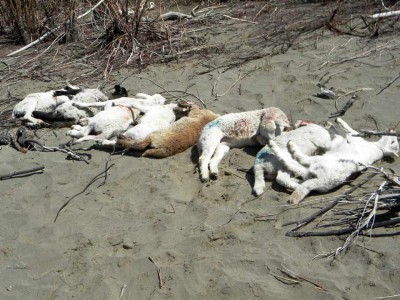 Photo courtesy of William Hoppe shows sheep killed by wolves overnight on April 23, 2013, on his property near Gardiner.

Associated Press picked up a story of wolves killing 13 sheep near Gardiner, one of Montana’s three entrances to Yellowstone, reported today in the Bozeman Daily Chronicle. This report is sure to draw attention and controversy as the livestock owners and animal rights activists continue to differ on wolf management practices in the area. The sheep owner, William Hoppe, has previously  expressed his opinion that wolves are driving down elk population in the area and opposed the Fish, Wildlife and Parks Commission’s decision to close wolf hunting around Yellowstone National Park. Here are the first five paragraphs from the story in Bozeman Daily Chronicle:

On Wednesday, a U.S. Department of Agriculture agent responded to the property of William Hoppe and verified that two wolves killed 13 of Hoppe’s sheep during the night.

None of the sheep appeared to have been fed on, Steuber said.

Continue to the rest of the story HERE.