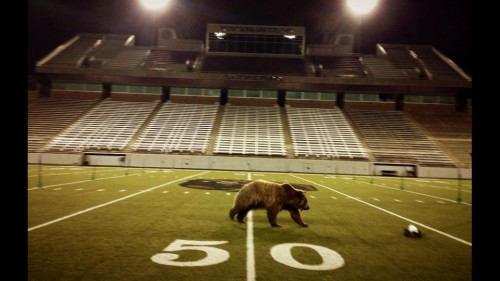 Washington-Grizzly stadium is home to Montana Grizzlies football team in Missoula, Montana. During the season all seats will be filled by eager fans, but this rare moment of an empty stadium, except one giant bear, was captured Wednesday night by Casey Anderson. He posted this picture of Brutus the Bear chasing a remote-control car around the stadium on his Facebook page.

Casey Anderson encompasses all realms of wildlife handling but describes himself as a naturalist, wildlife expert, trainer, and most important: best friend of Brutus the Bear. He posted this astonishing photo of Brutus on his Facebook page last Wednesday with the caption: “Brutus-the-Bear chasing a remote control car at Grizzly stadium. Just another night at work!”

Anderson is also co-owner and director of the Montana Grizzly Encounter, a grizzly bear sanctuary in Bozeman, Montana. According to his Facebook page, he also has a show Nat Geo TV show called America The Wild.

It hasn’t been made public exactly why Brutus is romping around Washington-Grizzly stadium, but I imagine the lovable bear is just doing what he does best: being a bear ambassador…or perhaps Monty has some competition!

As for Brutus, here is his bio taken from Anderson’s website www.grizzlyencounter.org:

Hi, my name is Brutus The Bear. I am a nine-year-old male brown bear. I was born at an overcrowded wildlife park where my future was uncertain. My future human parents adopted me at an early age; I was about the size of a squirrel. Currently I am about seven feet nine inches tall on my hind legs and close to nine hundred pounds in weight.

Casey and Ami raised me and could see right away that I was special. I enjoyed a lot of attention and loved to be in front of a camera. This has led me to be in many educational videos on bear safety. I have also had small parts in two movies, Iron Ridge and Pretty Ugly People. I am best known for co-hosting Expedition Wild with Casey Anderson.

I spend most of my days as an ambassador for my wild cousins; educating visitors from all around the world about bear safety and conservation.

My hobbies are rough housing with Sheena, swimming in my ponds, foraging for treats, breaking stuff, and hamming it up for the visitors. My favorite dinner is a large elk and avocado salad with huckleberry ice cream for desert!