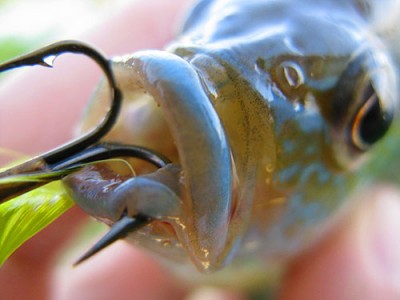 There are several ways to avoid getting hooked yourself while fishing (click HERE for some pictures of some pretty painful people hooks), but it is also important for catch-and-release anglers to know how to safely unhook a fish after it is caught.

According to an article posted on animal.discovery.com, there are five basic tips that are certain to help you unhook a fish that you are releasing back into the water:

1. USE A FISH-FRIENDLY HOOK

Marine wildlife researchers have found that the most important factor in a fish’s survival is the location of the hook in the fish’s body. Hook a fish in the gills or gullet, and it has about a 65 percent chance of surviving because of the risk of fatal internal injuries. In contrast, a hook in the lip or jaw area misses vital organs, which means the fish has between a 95 and 99 percent chance of surviving. For that reason, you should use a barbless circle hook, which has a point that’s turned perpendicular to the shank to form a circular shape. Unlike a “J” hook, this design isn’t as likely to catch a fish in the gut. One study showed that striped bass hooked with a circle hook were 11 times as likely to survive than those that were caught with “J” hooks.

2. REEL IT IN QUICKLY

Even the most adept hook-removing skills may not help your fish if the animal has been played to the point of physical collapse. Research shows that after hook location, the second most important factor in the survival of a hooked fish is the amount of physiological stress the fish is subjected to during the course of the struggle. A fish that’s been pushed to exhaustion has the least chance of staying alive, while one caught and released with sub-lethal stress will recover within 24 hours, to the extent that it will show no measurable effects from the experience. That’s why it’s crucial for you to bring in a fish as quickly as possible. To increase your chances of doing that, use a heavier leader. Even if you don’t catch as many fish as a result, they’re more likely to survive when you throw them back.

LEARN HOW TO HANDLE A PAIR OF PLIERS

Remember, the quicker you get a fish back into its habitat, the less physiological stress it experiences. You’ve got to work fast, which means having a sure hand with a pair of pliers. Keep the fish in the water and use the pliers to grasp the hook and twist your wrist, so that you simultaneously unhook and release the fish. Try to touch the fish as little as possible, to avoid damaging the protective mucus coating on its skin. That slimy stuff helps protect a fish from disease. If it’s necessary for you to handle the fish, make sure your hands are wet.

If you’ve used a fish-friendly hook and it isn’t in too deeply, unhooking a fish and releasing it is usually pretty straightforward. But sometimes, when you’ve got a really big, strong fish with a lot of fight in it, all the wild thrashing can make it frustratingly difficult to remove the hook. And the fish winds up injured. Canadian fishing expert Robin Pike recommends that you use this trick: Tail and invert the fish belly up in the water, which will disorient and pacify the fish for a few seconds. That should give you long enough to remove the hook and return it to its habitat.

KNOW WHEN TO LEAVE THE HOOK IN THE FISH

If your fish is unlucky and gets hooked in the gut or the gills, or if a hook seems stuck in the lip, don’t try to remove it. Removing it may tear the fish’s flesh and organs and exacerbate its injuries. Instead, simply cut off as much of the hook as possible and release the fish. After a while, hooks that are left in will rust and fall out or dissolve. For that reason, you shouldn’t use hooks made of stainless steel or some other corrosion-resistant material. You also should avoid treble hooks because the extra two points increase the chances of hitting a blood vessel. They also take longer to remove.