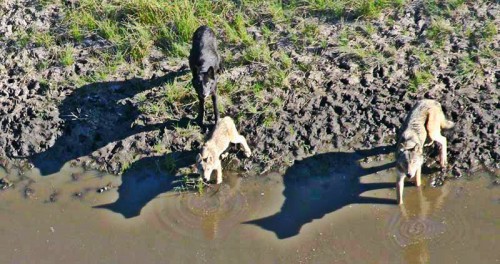 According to an article posted on the Missoulian’s website yesterday, it looks like wolf season could last for approximately 6 1/2 months, depending on what the state Fish, Wildlife and Parks Commission decides at a meeting scheduled for next week.  The article included the following information:

The commission will consider whether to lengthen the amount of time wolves could be hunted with rifles from Sept. 15 to March 31. Last year, the wolf hunting season started Oct. 15, with the regular big game rifle season, and ended Feb. 15. Hunters harvested 128 wolves during the 2012/2013 season and trappers took 97 for a total of 225.

This year, however, the start of the rifle hunting season would coincide with the black bear and backcountry big-game rifle seasons. The trapping season, which ran from Dec. 15 through Feb. 28 in 2012 and 2013, would remain the same this season under the proposal.

There will also be some proposed changes that would allow hunters to “take wolves over bait placed to trap wolves during the trapping season”.  This means that wolves could legally be harvested if they were spotted on their trap lines, without having to worry if bait is present or not on the trap set.

Additionally, a proposal to modify the requirement to immediately kill trapped wolves will be discussed to give wolf trappers the opportunity to work with FWP in collaring wolves.

The article states that the following quota and season change proposals are as follows:

FWP will continue to maintain the general season without a statewide quota under the proposal. However, a seven-wolf quota would be set in an expanded Wolf Management Unit 316, just north of Yellowstone National Park, and the quota would remain at two wolves in WMU 110 abutting Glacier National Park.

The state agency also is asking the commission to allow FWP to initiate emergency season closures at any time, especially if harvest levels seem excessive.

“Any such closure would necessarily include an appropriate timeline and public notice, and that may include press releases and posted signs,” according to FWP.

It looks like there is a lot to talk about at this meeting that will take place in Helena, at the Montana Wild Center next Thursday at 8:30am.