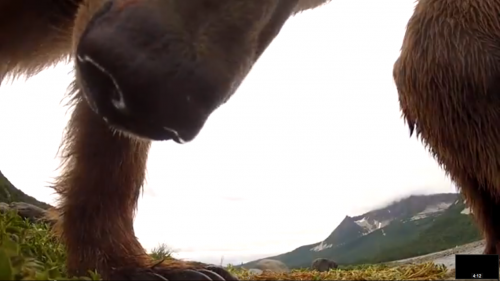 “A Grizzly Ate My Go Pro!”
By OutdoorAly

Ever wonder what it would be like to be eaten by a grizzly? To look deep inside its mouth and feel warm breath on your face? Not likely on any bucket lists, but wonder no more. This video captured by a biologist in Alaska is about as close as you can get without experiencing it in person.

The footage was shot by a Go Pro camera that Brad Josephs rubber banded to a rock and strategically placed in bear country hoping to gain close footage used on Great Bear Stakeout BBC and Discovery Channel film.

“The first bear to appear is an older mother, and the second is her 3 year old cub,” said Josephs, “The bear only gently mouthed the camera, and didnt even put a dent in it! ”

You can do your own grizzly expedition adventure with Josephs. Read more here.Video copyright Brad Josephs.