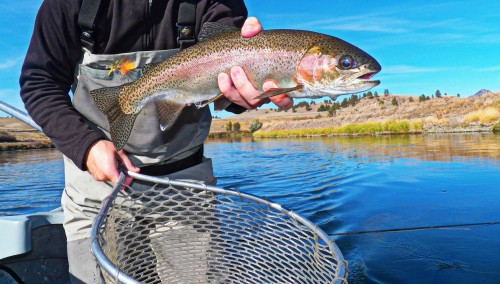 Helena Area Reservoirs Fishing Report for the Week of 5.28.13
By angelamontana

Canyon Ferry: The rainbow trout spawn has slowed down, but some fish are being caught throughout the reservoir. Shore anglers are doing best at north end access points, especially at the Outhouse and Cave Bay, using worms, spoons or bead head nymphs. Some boat anglers are doing fair tolling cowbells (tipped with worms), crankbaits or spoon variations in 5 to 25 feet of water. Walleye anglers are catching fish on the south end of the reservoir trolling crankbaits or worm harnesses at shallow depths. Some walleye are being caught jigging bay points mid reservoir. No report for yellow perch or ling. Spring moisture has water levels on the rise, so watch for large woody debris throughout the reservoir. Adam Strainer, FWP, Helena

Holter: Good rainbow fishing can be found while trolling cowbells tipped with a worm or Thomas Lures between Split Rock and Departure Point. Shore action is fair around Departure Point and Log Gulch while using marshmallows or worms. An occasional walleye is being caught while using bottom bouncers. Perch fishing is very good in the lower half of the reservoir in bays while using worms. Most perch are being caught at depths of 15 to 25 feet deep. Troy Humphrey, FWP, Helena