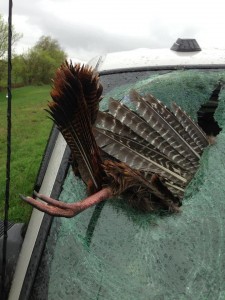 A flock of around 60 wild turkeys have taken up residence in the small Oregon town of Jefferson and are terrorizing townspeople.

Complaints that birds are ruining gardens, destroying lawns, and harassing people have been received and the nearly 3,000 residents are fed up.

The city of Jefferson has hired a hunter to shoot three male turkeys last week as part of an effort to reduce the population. Code enforcement officer Gregg Gorthy said birds tend to disperse when older males are removed from the flock. The meat from the dead turkeys will be given to lower-income residents. 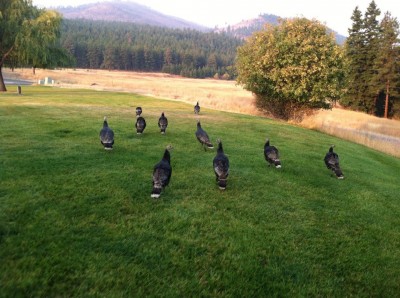 A flock of turkeys in the Blue Mountain area, courtesy Alyson Booher

Of course not all the residents are on board with the decision to take out toms. One resident, Lori Hayhurst, wants help in capturing and relocating some of the wild turkeys roaming her neighborhood before the deputy begins shooting the sometimes-troublesome birds. A blog www.jeffersonturrkey.com was started shortly after city council decision in an effort to educated and provide more information on wild turkeys.

The city has taken other steps to limit turkeys, including a new law that prohibits people from feeding wildlife within city limits.

This story was compiled from these sources: Registered Guard, Albany Democrat-Herald , Oregon Herald