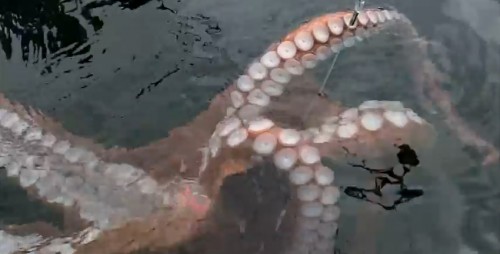 Have you ever gotten a bite on your line and assumed you got a snag because it was such a chore to reel in your catch?  Well, Bryce Molenkamp hooked more than a fish during his fishing trip off the coast of Washington.  Jeff Anderson managed to get some fantastic underwater pictures of the aquatic beast being reeled in.

According to the “About” section with their video on YouTube, the octopus was kept and eaten, not by the photographer, though.

Would you keep or release an octopus?  Let us know by visiting our Facebook page at facebook.com/montanaoutdoor!