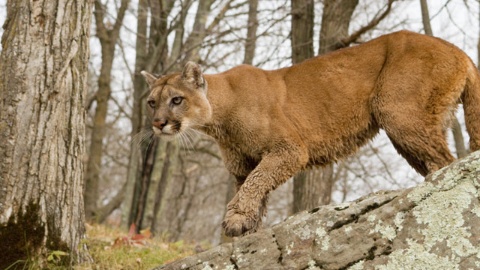 Man Uses Skateboard to Ward Off Cougar
By OutdoorAly

A skateboarder was attacked by a cougar in Banff last weekend, and used his skateboard as a weapon to clobber the cat and stun it long enough to make an escape.

The victim was walking on a path outside the township wearing earbuds, which likely allowed the cougar to sneak up and attack him from behind.

The victim originally reported the incident anonymously and gave very few details on the attack. Authorities haven’t yet caught the cougar, but they did locate the victim. He admitted that he was knocked to the ground and felt he had no choice but to battle the animal by hitting it away with his skateboard. 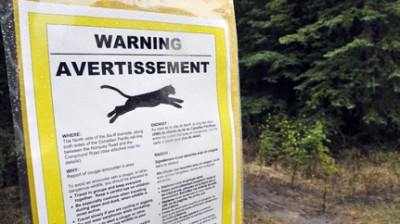 Warnings of the cougar attack have been posted in the area. Credits: Corrie Dimann/QMI Agency.

In the case of being attacked by a cougar, the right thing to do is fight back. Huffington Post reported the following:

Parks Canada conservation manger Bill Hunt said,”I think he was reluctant to contact us right away because he’d be in trouble for striking an animal inside a national park. But of course, in that situation you’re in defense mode and it’s totally appropriate.”

“He was hit from behind, knocked to the ground and instantly reacted properly. With a cougar, the correct thing to do is fight back hard and convince that cougar that you’re not going to be available for prey,” Hunt said.

Canadian authorities closed part of Banff township in Canada, where the attack occurred.

Because this cougar seems to be displaying predatory behavior too near the popular tourist town, authorities may have to euthanize the animal. However, they have said that they will try to understand why it attacked before they make their final decision.

Side fact: cougar, mountain lion, and puma are all different names for the same species.