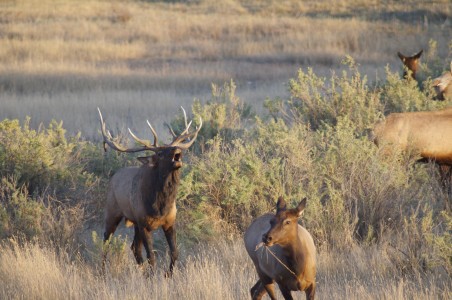 “Based on sportsman and landowner interest in maintaining current populations combined with minimal game damage complaints from private landowners, I feel we have found a healthy balance between optimizing recreational opportunity and minimizing local impacts,” Waltee said. “However, I have concerns going forward about allowing population growth to continue as it has and feel we are rapidly moving towards a point where growth could get away from us. If elk populations continue to increase at the present rate, there will be 4,000 elk in HDs 704 and 705 a decade from now. That many elk would cause more conflict than enjoyment. Overpopulated elk would lead to poor landowner tolerance and could degrade habitat, leading to mule deer population declines. Neither sounds ideal to me,” said Waltee.

According to Waltee, MFWP Biologists use antlerless quotas to manage populations. “A single bull can breed more than 20 cows in a season, so harvesting males has little impact on population growth rates. Elk population management will depend on increasing annual cow harvest.”

Annual cow harvest across HDs 704 and 705 is increasing and has averaged 112 over the past five years. However, it remains lower than needed to curb continued population growth. Approximately 160 cow elk need to be harvested annually to match reproductive rates and maintain current populations. “This seems like a marginal increase but population growth becomes exponential,” Waltee explained. “The more cow elk there are giving birth, the faster the population will grow.” If the population exceeds or even approaches 4,000 individuals, it will become difficult to achieve sufficient harvest to manage population growth. Because the increase in cow harvest necessary to curb growth is currently minimal, now is the time to act. Ten to fifteen years from now will be too late,” Waltee cautions.

Because deer and not cow elk hunting attracts most hunters to southeast Montana, Waltee suspects the key to successful elk population management will be allowing access to hunters targeting deer but who will also harvest cow elk as opportunities arise. “The need to capitalize on antlerless harvest opportunities is the primary reason MFWP implemented and has maintained the general antlerless structure outside of USFS boundaries,” Waltee said. “This structure provides landowners with the flexibility needed to manage private lands elk populations within their tolerance.”

Waltee’s concern with growing elk populations are the resource competition impacts they will have on other wildlife like mule deer and also local livestock operations. “Elk have become popular across southeast Montana, but too many will have a substantial impact,” Waltee said. One adult elk equals 0.6 Animal Unit Months (AUM). This means that a single elk will consume 3 times the forage of a mule deer, which equal 0.2 AUM, and about 60% of the forage required for a cow-calf pair.

“Wildlife managers and enthusiasts need to recognize the impacts elk have on folks trying to balance wildlife populations with making a living off of the land they manage,” said Waltee

“The goal” Waltee emphasized, “is not to drive elk populations down, but work towards maintaining current populations which are manageable, socially acceptable, are providing reasonable recreation opportunities, and have not significantly impacted mule deer populations. Simply defined, we have struck a good balance between interests.”

Those interested in learning more about survey efforts or findings are encouraged to contact Wildlife Biologist Dean Waltee at (406)436-2327 or by email at dwaltee@mt.gov.