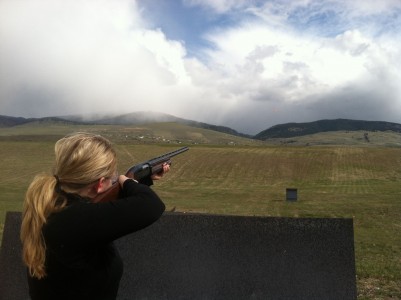 I was born and raised in Montana and before last week, had never fired a gun. For so many that live and hunt in Montana, shooting guns are a part of every day life. For all intents and purposes in my life they were useless, intimidating, and a little scary. That was until I shot one.

I had the pleasure of meeting Larry Flanagan, president of Missoula Trap and Skeet Club, at the Great Rockies Sport Show about a month ago. He invited me out to the club and offered to show me around. That sounded okay, but then he said he would let me shoot his gun. My curiosity was piqued, and with all the gun control debate going on right now I figured it was time to see what all the hype was about.

Safety First! Larry started with the most important thing when working with guns; safety. We went over the do’s and don’ts and more rules specific to the club. 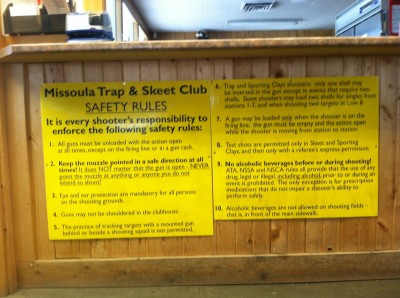 Then he showed me his shotguns and explained each part and its function. 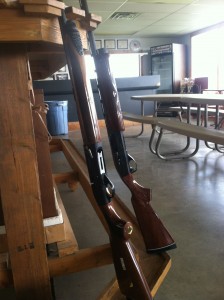 Next I learned how to hold a shotgun. I tried to maintain a boxer-like stance with the butt of the gun pressed in the crease of my shoulder with my cheek placed firmly into the stock. Any deviation from the correct stance will result in either the gun kicking back into the muscle in your arm (so that’s where that bruise came from) or missing your target when you move your face away from the stock. I did a fair share of both these mistakes, and yes I do have a bruise on my arm. 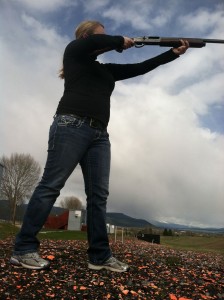 Then Larry showed me how the clay pigeons get discharged from this nifty machine. 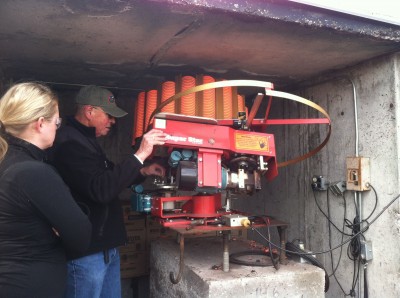 And finally, I got to shoot. 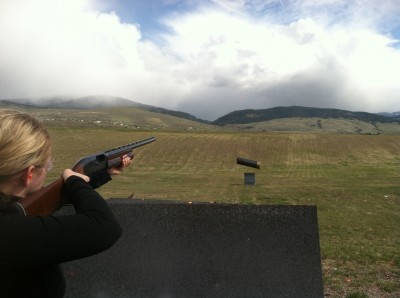 Can you see the cartridge flying through the air?

I have to admit, that first shot was scary and intimidating. But once I pulled the trigger and felt the power I got a little excited. Then when I figured out I could actually hit the target, I got really excited. Then when Larry told me I could be a part of a league where I could shoot guns, then eat a burger, and drink a beer (when done shooting of course) I was sold. Guns are cool. No, not every idiot needs to own one, but when used responsibly they can open up some pretty awesome hobbies and sports. When it started to snow we decided to call it quits. It wasn’t because my arm was getting tired and bruised, it was definitely the snow. Okay, I got tired, I think Larry could have been out there all day shooting with me snow or shine, but I got tired. I also got some fun video of me and Larry shooting, check it out:

For more information about the Missoula Trap and Skeet Club, visit their website www.missoulatrapandskeet.com