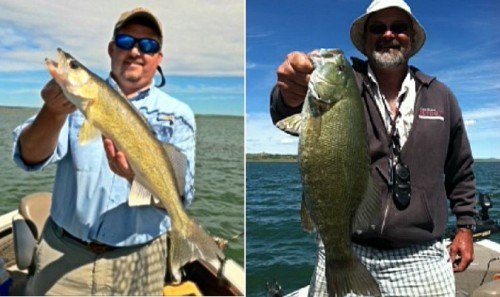 A Week of Walleye Fishing on the “Puddle” : Captain’s Column
By angelamontana

Last week, I spent a few days on the water fishing for walleye. My destination was Canyon Ferry Reservoir. The walleye bite on the “Puddle”, as Bob Culp from Frenchtown refers to the popular fishing destination for trout, walleye, ling and perch is located just south of Helena. 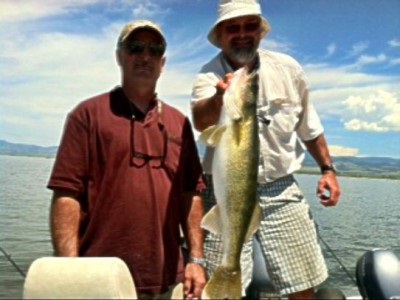 I had heard from Culp that the walleye bite was on! When the bite is on, that also means that most anglers will end up catching walleyes, but it is not a given by any means. The bite is influenced tremendously by weather. The weather conditions during the month of June are always unpredictable. So, that means that one day the bite might really be on, and the next day, the bite won’t be anywhere to be found on Canyon Ferry.

I arrived on Monday afternoon and hit the water at 6pm with Steve Hellegaard, from Missoula, and Jim Swanson, from Sheridan, Montana. We headed over to Pond 1 on the east side of the south end of the reservoir. We had heard that the walleyes were active in that area of the lake.

What we had heard was correct!  The moment we put our lines in the water we were reeling in fish. In all we boated 24 walleyes in two and half hours. We fished in 6 to 12 feet of water and it didn’t seem to matter what we were using, as long as it was tipped with a night crawler.

The next day, the weather was about the same. The forecast called for a very nice day with some thunderstorms in the afternoon. But, even with the consistent weather from the night before, Tuesday fishing was considerably slower. We fished all over the south end of the lake on Tuesday and ended up with 19 walleyes boated, with the largest being 22 inches. Still not a bad day of catching.Hellegaard and Swanson left for their homes that afternoon with some nice walleye fillets to enjoy. 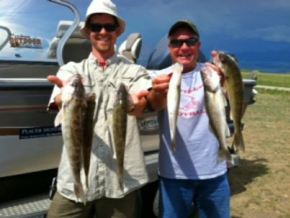 The next day, Marc Spear and Dave Montelius, from Missoula, drove over to join me for the day. The weather forecast for Wednesday was calling for winds in the 4 to 5 mile per hour range in the early morning and then steadily increasing throughout the day.

My guests arrived around 7:30, and it was apparent that Mother Nature had not heard the forecast. The winds were more like 15 miles per hour and coming from the north, which made the south end of the lake rough. Boat control is important when walleye fishing so the conditions were far from ideal. More wind means bigger waves and that means it is tougher to get the correct speed while you are trolling.

It was also apparent by the air temperature that a minor cold front had moved in overnight. The surface water temperature had fallen by 4 degrees from day before.  When this happens, walleyes tend to develop “Lock-jaw “.

Walleye Wednesday on Canyon Ferry considerably slower than the previous two days, By 3:30 in the afternoon, we had only 7 walleyes for our efforts.  To the east of the lake, a major storm system was heading our way with the threat of lightening, hail and even a tornado! It was time to get off the water with the hope the walleye bite we experienced earlier in the week would return the next day!

(Written by the Captain;  Photos: Jason Savage Photography, the Captain)