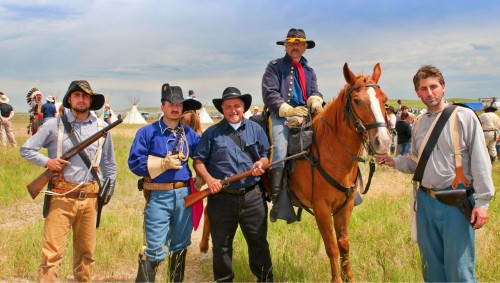 Battle of Little Bighorn Reenactment This Weekend!
By OutdoorAly

The battle has also been called Custer’s Last Stand, and Battle of Greasy Grass.

Hosted by the Real Bird Family, the 18th Annual Battle of the Little Bighorn Re-enactment is held at 1 pm on the 21, 22, and 23 June 2013 at the 135th Anniversary of “Custer’s Last Stand. Learn and experience the historic struggle for control of the West by visiting the amazing Little Bighorn Reenactment firsthand – where the Sioux Nation was encamped. The Reenactment is located just south of Crow Agency, MT and between the historic points of Custer’s Last Stand Hill, Reno’s Charge / Retreat, and Reno – Benteen Battlefield. Held at Medicine Tail Coulee and Minneconjou Ford, this is where Custer’s Battalion was closest to the village and where E and F Troops were sent to attack the Indian village. This battle is located between the Little Bighorn National Park/Museum and Garryowen/Custer’s Battlefield  Museum.

Witness Bvt. Major General Armstrong Custer, played by Steve Alexander (recognized by Congress to be today’s foremost Custer Historian), and the 7th US Cavalry Troopers come out of the Medicine Tail Coulee and clash with authentic Indian Braves as they both cross the Little Bighorn River, showcasing their great riding ability, to recreate that famous day of June 25th, 1876. This reenactment briefly reviews the history of the interaction of the Whites and the Native Americans in the West, Native American culture and Horsemanship, and the major battles of the Northern Tribes. Experience with all your senses this epic battle of 600 7th US Cavalry and over 1,800 Warriors of Sioux, Cheyenne, and Arapahoe Indian Nations.  The Battle of the Little Bighorn Reenactment started almost twenty years ago, to share more of the Native American story of the Indian Wars and to have the reenactment on the ground where the teepees of the Indian Village were located, between Custer’s Last Stand Hill and Reno-Benteen Battlefield.