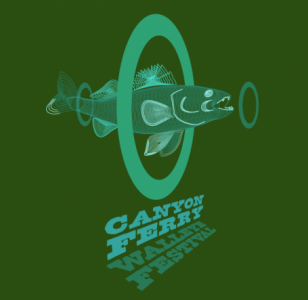 Well, day one at Canyon Ferry proved to be a challange for a lot of the anglers today. The weather put a bit of a damper on the bite today, with cold north winds and rain, compared to what the bite had been earlier in the week. The bite was as expected by some who showed up for Thursday and Friday because the weather with multiple fronts and wind shut it down.

However, 17 of the teams did weigh 5 fish with Rob Hazelwood and David Madden weighing in the top basket with 4 fish and 15.20 #’s to go into the lead with over a 3 # lead.

In 2nd place is the team of Jacob updike and Brandon Colb y of Townsend with 11.94 #’s.

4th place is Patrick and John Bannon from Deerlodge with 9.12 3’s.

5th place is Dennis Willert and Mike Crider from Helena with 8.83 #’s.

Some 31 teams zeroed on day one and another 33 teams only had one fish — a pretty darn tough bite.

The good news is that anyone can win it tomorrow.

There is also a big walleye pot that will pay out another $1380 for the biggest walleye tomorrow and the Scheels Hardest Charger and the A-Z Cool Under Pressure Award that are up for grabs.

With the weather settling down and better forecasts for tomorrow, I would expect a lot better bite so stay tuned for the Final results from Day two.