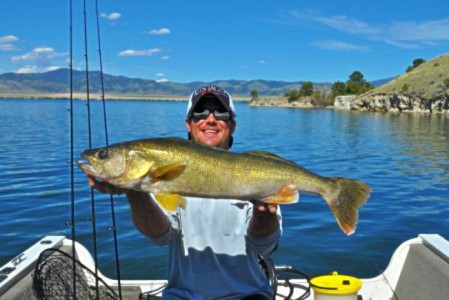 This weekend will mark the 15th annual Canyon Ferry Walleye Festival on Canyon Ferry Reservoir. It is an event that is hosted by the Townsend area Chamber of Commerce and has become the most popular walleye tournament in Montana. 150 two person teams will hit the water at 6am Saturday to start the two-day tournament. Over the years, the tournament has had its share of story lines.

In 2002, when Jim Farrington from Stevensville and I were fishing together in the tournament, a huge storm rolled in from the Northwest the first day about 11:30am on Saturday. A couple of the team’s boats actually capsized. Fortunately, there was nobody injured, but I remembered a lot of guys walking on shore that day talking to each other in amazement on how Mother Nature had wrecked havoc on for the teams in the tournament. For Farrington and I, the storm was so powerful that it took us an hour to travel only 6 miles as we battled the tremendous force of the waves. The next day, the weather was better, and the tournament resumed with less than the original 150 boats that started the day before.

In 2004, Canyon Ferry lived up to its name as a monster walleye lake, as the winning team caught 72.42 pounds. Then the next year, a different team ended up winning with an even more impressive 78.5 pounds. Those years just happen to be the peak of the big fish caught during the tournament. In 2011, the winning team caught only 15.91 pounds, but last year the weights began to rise again.

The father son team of Kit and Tevor Johnson, from Helena, caught just over 41 pounds to win the $10,000 first place prize. The Johnsons own and operate Kits Tackle in Helena, and they manufacture a jig that they call the Glass Minnow that is sold across Montana. This jig comes in various colors with a unique tail that fans out when it is submersed in water to resemble a small bait fish.  When tipped with a night crawler, leech or Gulp minnow this jig can be very effective. During the tournament in 2012, they were using the Yellow Perch color.

So what will be the story line in this year’s tournament? Will the winning team fish the north part of the lake or will they fish the south part by the ponds? Will they pull bottom bouncers or cranks? What kind of weather will the anglers have to contend with on Saturday and Sunday?  As you might already know, when it comes to fishing that could be any ones guess. But one thing is for certain there will be one team on the water that will be jigging their dream and trying to win it all for the second year in a row.

Tune in Saturday morning from 6a-8am as Adam Strainer from FWP and I will be broadcasting the Montana Outdoor Radio Show live on the water for the 15th year. Hear it in Missoula and Hamilton on KGVO1290am/101.5 fm, KLYQ 1240am, in Polson on KERR 750am and in Kalispell on KJJR 880am, and watch for the tournament results on montanaoutdoor.com.