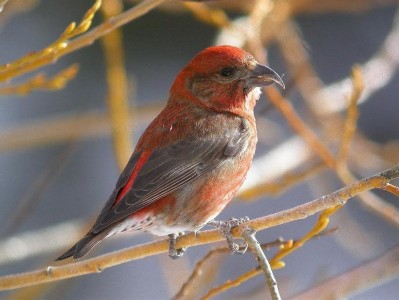 An unusual number of dead birds have been found in Billings-area yards with bird feeders this spring. Nearly all of the birds are red crossbills, a species of finch that normally feeds on conifer tree seeds.

Wildlife disease specialists at the National Wildlife Health Center in Wisconsin concluded that the deaths were due to avian salmonella, a naturally occurring bacterium, possibly originating from contaminated food.  Salmonella spreads among birds through their feces.

Since mid-May, dead birds have been reported around at least eight bird feeders in the Billings and Laurel areas. One resident had 50 dead birds so far, and it is likely that other die-offs went unreported.

If dead birds are found, the National Wildlife Health Center recommends cleaning bird feeders thoroughly with a solution of warm water and 10 percent bleach, then rinsing and air drying them.  Feeding should not be restarted for two or three weeks to encourage birds to disperse and forage naturally.  An even better solution, the center said, is to not feed birds at all during the warmer months. Any time birds are concentrated unnaturally, it hastens the spread of diseases such as salmonella.  During the summer months, the birds don’t really need our help.

While most of the dead birds have been red crossbills – which are especially susceptible to salmonella – other species also can be affected and may either die or serve as carriers of the bacteria for several weeks.

The NWHC also notes that the salmonella strain usually found in birds may cause illness in people, but that the risk can be minimized by wearing rubber gloves when handling dead birds or feeders or cleaning bird droppingsoff decks and other surfaces.  They also say that it is a good idea to discourage pets from picking up birdcarcasses.