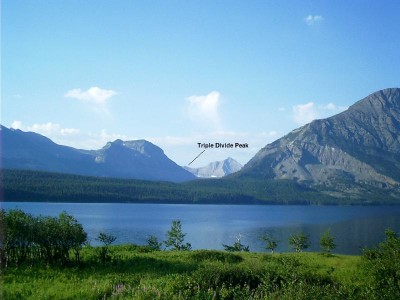 Montana is a one-of-a-kind place–that we know.  But, did you know that something that makes the big sky state even more unique is that it is the only state with a triple divide, allowing water to flow into the Pacific, Atlantic, and Hudson Bay. This phenomenon occurs at Triple Divide Peak in Glacier National Park.

According to wikipedia.com, the Triple Divide Peak has a summit of 8,020 feet and is located in the Lewis Range of Glacier National Park. “It is a hydrological apex of the North American continent, where the Great and Laurentian divides meet at the summit of the peak.  Thus, all water that falls at this point can flow to the Pacific, Atlantic, or Arctic oceans (when Hudson Bay is considered an Arctic tributary), making the locale (and surrounding Waterton-Glacier International Peace Park) one of the few places on the Earth whose waters feed three oceans.”

Yep-Just another thing to add to the list of amazing things about Montana!