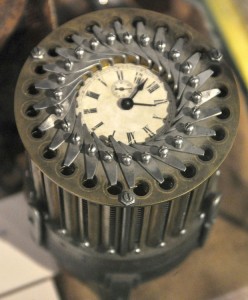 They named it the “Night Herder,” or the “Weed Automatic Gun.”

It was a device invented by Carbon County sheepherder Jim Weed, and was designed to fire a round at hour intervals automatically throughout the night to keep coyotes away from his flock.

This was right around 1901 in Rawlins, Wyoming, at a time when it was common practice from herders to wake up periodically in the night and fire off a round to keep their flock safe from predators.

The device was triggered by the hand of an attached clock and would fire .44 caliber blanks every hour for up to 12 hours unattended, allowing the herder opportunity for more rest.

But sometimes the business of patents and financial backing gets in the way of a good idea reaching the general public.

Weed sought financial backing but appeared to have eventually been edged out of production. The business eventually dissolved and it isn’t clear if many more of the clever device were ever produce.

But this summer a working example is on display at the Carbon County Museum, and any visitors passing through Rawlings, Wyoming can see this ingenious invention.

More historic information on the device can be found in a story from the Rawlins Daily Time here.