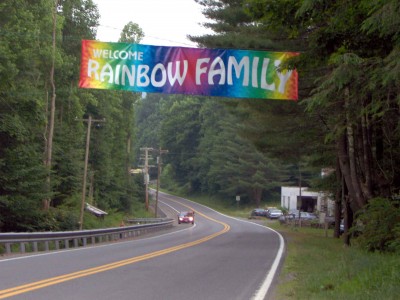 I know the Rainbow Gathering isn’t really something I see a majority of hunters and anglers attending this summer, but it is a gathering of around 20,000 people who will all be camped out in our national forest this summer for at least a week, many times longer.

This could be a shock if you are headed out to your local camping spot only to find drum circles, sweat lodges, massage sessions, and yoga clinics going on.

I thought it was a good time to address the giant elephant in our state.

According to Wikipedia page:

The Rainbow People of Living Light has been an established group that gathers for the cause of world peace since 1972 on public land every July 1-7th. Rainbow Gatherings and the Rainbow Family of Living Light (usually abbreviated to “Rainbow Family”) are an expression of a Utopia impulse, combined with bohemianism, hipster and hippie culture, with roots clearly traceable to the counterculture of the 1960’s.

This year they decided on a spot in the Beaverhead-Deerlodge National Forest near Jackson, the same spot they gathered in 2000. That gathering drew in around 20,000 people. If you are wondering exactly what, or who Rainbow People are and why they gather each year, a Wikipedia article can be found here. Or, I included this guys video explanation below:

The group so far has been extremely cooperative with local authority, but has a bawdy past history of group gathering malfunctions including: nudity, drug use, damage to forest lands, campgrounds and facilities, with human waste, trash and other mess such as abandoned vehicles.

The Montana Highway Patrol has beefed up its patrols and is headquartered in the Jackson Hot Springs Lodge for the upcoming event. The Forest Service has already reiterated that nudity is not allowed on public land.

The first official day of the gathering starts Monday, but people have slowly been making their way to Montana since before summer solstice.

One local was quoted in a Bozeman news site:

“You can pick ’em out real easy going down the road, trunk lid was still straight up, stuff piled clear to the top, there was a whole bunch of stuff on top and I couldn’t get a good count, it was either 7 or 8 people in it,” resident Jay Nelson of Jackson said.

It should be an interesting week for the town of Jackson, Montana. The town has an average population of around 150 people, and will be experiencing quite a culture shock.

The charity bike race event Ride Around Pintlers in One Day, or RATPOD, will be happening this weekend as well. Riders will have to watch out for the extra traffic on that stretch of highway.

I am not sure how many actual resident Montanans plan to attend, but if you want to avoid or attend, here is where the gathering will be: