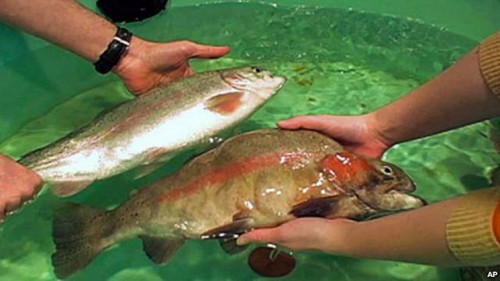 Arnie has a physique that many people wish they had–only he is a trout!

According to an article posted on dailymail.co.uk, this genetically-modified fish has been a ten-year project by Terry Bradley, a professor of fisheries at the University of Rhode Island. The article states that “While the physical differences in the fish include a prominent dorsal hump, making it look as if it has muscular shoulders, and the appearance of ‘six pack abs’, no differences in behavior have been noted.”

You might be wondering what the purpose of this could be.  Well, Professor Bradley was quoted stating “‘The results have significant implications for commercial aquaculture and provide completely novel information on the mechanisms of fish growth.  The results also allow for comparisons between the mechanisms of growth of muscle in mammals versus fish, and it could shed light on muscle wasting diseases in humans.”

Additionally, the findings in this study could potentially change the seafood industry by creating more fish at a cheaper cost.  I am not sure how or if this would affect the taste of fish, but I do know that if I were to reel in an Arnie, I might be a little freaked out at first! Check out the video clip below to see these genetically modified monsters: