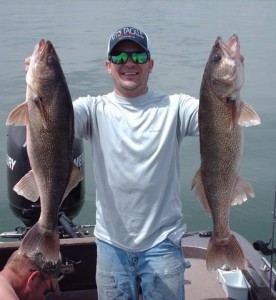 (Above photo caption: A couple of the babes we caught to get 4th place!! – photos courtesy of Trevor Johnson)

Before I get lost in the wonders of Fort Peck, I want you to really think about something truly AWESOME first.  The team that took the 2013 Rock Creek Walleye Tournament had just shy of ninety pounds of fish for a two day bag (ten fish.)  Having caught a lot of big fish myself, it is still not easy to wrap my head around a nine pound average for the ten fish in the box…DANG!!  My partner and I pulled an impressive two day weight of almost 54 pounds and finished in 4th place.  There are not many tournaments where a team pulls a weight in the mid-fifties and gets 4th place…gotta love Fort Peck and the fishery it is!!  The weather was so unforgiving the days before the tournament my partner Ken Schmidt and I were not able to pre-fish which hurt us on game day, but we fished hard and made up for it!!  As for the tournament days, they were two of the nicest days (weather wise) I have ever seen on Fort Peck.

As I headed over the north hill out of Helena on the way to Rock Creek, I took a deep breath thinking about the riveting 450 miles in front of me.  In fact, the drive to Fort Peck is so freaking exciting I would put it right up there with the time I went skydiving or having a 350” bull elk bugling his head off at ten yards…NOT!!!  As the drive never gets any shorter, Fort Peck gets more glamorous every time I see her.  After getting settled in and seeing all my Rock Creek friends it was time to rig a few rods and hit the sack.  After a short night, it was time to ROCK, literally!!

After uncovering the boat we were ready to launch and I could already see the hesitance in my partner’s eyes.  No matter how many times I back a boat down the darn ramp his big Ranger gets me every time…I make us look like real pros out there I tell ya.  I can see Ken now telling people as I back him in, “I don’t even know who this guy is, he just offered to back me in.”  Ha ha!!  Being last out the first day, there was with no surprise a few boats in our spot.  Before I could even get my jig in the water the walleye goddess was loaded up with big fish…and no, I’m not talking about my partner Ken.  If you know Whit and Carly Rush or see a Ranger with a great guy and his wife and her pink rod…ahh the pink rod (What I wouldn’t pay for that thing!!) you better watch out.  As your fishing attorney, I advise you to leave the area because Carly will catch all the fish before you…TRUST ME!!  Not only did she put on a jig fishing clinic, I got my butt whipped by a girl!!  I tip my hat to the husband and wife team of Whit and Carly Rush…DANG!! 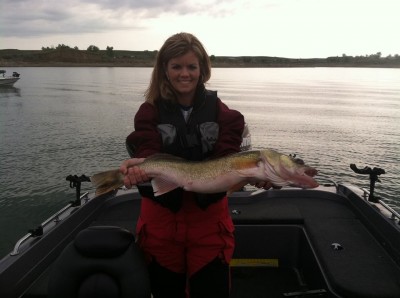 The walleye Goddess (aka Carly) with a HUGE freakin’ walleye!!

Finally, with my jiggin’ arm burning for that “whack”, I set the hook in what felt like a log hooked sideways.  As it started to move I told Ken, “good fish, good fish!!”  We Helena boys do things a little different than the Fort Peck boys and Ken was on the edge of his seat with my 6lb Stren- Magnathin and my back reeling rather than using the drag.  His exact words were, “I can’t watch man, tell me when to net him.”  As the giant finally approached the boat, I saw that prehistoric head shake and began to shake a little myself.  Before I knew it, the fish was in the boat and we were fist pumping!!  It turned out to be a very healthy 28.5” behemoth that devoured a “Yellow Perch” Glass Minnow.  With a few good fish in the boat we still had a long ways to go to stay competitive in the tournament.

In the next day and a half we used the techniques of jigging and rigging.  We were tipping the Glass Minnows with small fathead and shiner minnows and we used the same minnows on the rigging rods.  My partner is one of the best riggers anywhere with extreme knowledge of using his graphs and precise speed and boat control.  I have to admit, I could never enjoy rigging until I went with Ken.  He has taught me a boatload about the technique the how to let your rod load up before setting the hook.  I still wake up in my sleep setting the hook on my dead rod to Ken’s voice saying, “NOW, HIT HIM NOW!!”  Ahhh…damn fishing is some fun stuff!!

As day two came to an end we weighed our fish that we worked very hard for and thanked the lord for his blessings upon us.  Not only was I able to fish one of the most magical places on earth for the weekend, I was able to do it my good friend and get paid for it!!  Surrounded by great people and fun times the Rock Creek Tournament is a yearly fish -head jamboree I wouldn’t miss for anything.  In fact, on Saturday night I think I set a new record for farthest drive hitting a golf ball off the top of an Old Milwaukee can…the golfers in the bunch said, “dood, you wanna be on our league?”  “Naa”, I said, that’s just time away from fishing for me boys!!

AND A HUGE THANK YOU AND SHOUT OUT TO ALL THE VOLUNTEERS AND PEOPLE INVOLVED WITH MAKING THE ROCK CREEK TOURNAMENT HAPPEN!!  Cheers to “Jiggin’ the Dream” at Rock Creek!!

Like AC/DC said, “For those about to rock, we salute you”