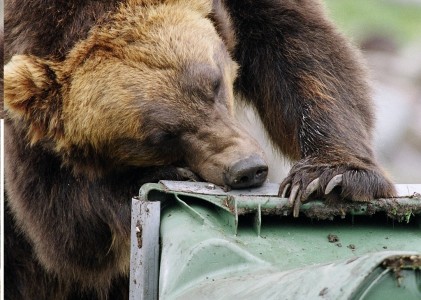 A 3-year old, 177 pound female grizzly bear was euthanized on Saturday after being captured by FWP biologists in the Glenn Lake area near Eureka.

The grizzly was captured after receiving numerous complaints of a bear getting onto porches to seek food in the Glenn Lake and Crystal Lake area. Earlier, the bear entered the Crystal Lakes subdivision and had gotten a beaver carcass off a back porch and dog food that was left outside. An effort was made to trap the bear, but she left that immediate area. The grizzly was not wary around people and would approach vehicles and homes when people were present. Due to her past history of food conditioning and bold behavior, FWP decided to remove the bear.

The bear was originally captured 3 years ago as a cub with her mother and sibling at a pig farm in the Pinkham Creek area, where they had gotten into pig feed. They were released in the Whale Creek drainage. In October of 2012, this bear was captured outside of Eureka after getting into garbage, and it’s believed that she is the bear that was seen along the River walk at Eureka. She was released into the lower Whale Creek drainage and denned north of Deep Mountain, where she dropped her radio collar. The bear returned to the Eureka area this spring.