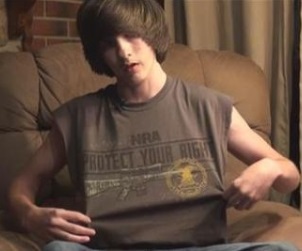 The date was April 18, 2013 when 14 year-old Jared Marcum of Logan, West Virginia, was told by his band teacher to remove his shirt or turn it inside out.  The reason for this demand was that Marcum’s t-shirt boasted an image of a semi-automatic rifle along with the words “Protect Your Right”.

According to a recent article posted on nraila.org, Marcum refused to change his shirt or turn it inside out, as he told the teacher it was a violation of his first amendment right.  Marcum’s classmates were in support of his stance, but other school officials became involved at that point.

According to the article, “Jared persisted in asserting his rights and refusing to remove the shirt, <and> school officials called the Logan Police Department, complaining of an “unruly student.”  Police arrived to find Jared in the principal’s office, still wearing the shirt.   An officer ultimately arrested Marcum, claiming that his repeated assertions of his rights, even after being warned to be quiet, constituted obstruction of a police officer. Marcum was also given a one-day suspension from school.”

On June 17th, Marcum was charged with obstructing a police officer with the possibility of incarceration in a juvenile facility.  Fortunately, on June 27th, the parties agreed that there would be no legal action resulting from the case.  Marcum did not admit guilt, but he did offer an apology to the officer.  The NRA was contacted and provided assistance to Marcum’s attorney during the ordeal.

Interesting that wearing a simple t-shirt could create such a ruckus.