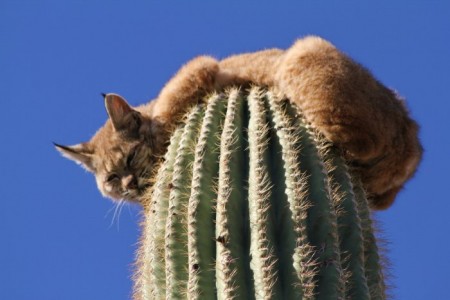 Bobcat Finds Comfort on a Cactus
By angelamontana

I was recently forwarded an email that included pictures of a bobcat perched on top of a cactus.  That in itself was kind of cool, but when I saw how tall the cactus was, I couldn’t believe it!

Check out the following paragraph of information that came with the pictures and explains them:

The photos were captured in Gold Canyon , on the foot of the Superstition Mountains .

The bobcat was trying to get away from a mountain lion that was stalking it, explains the photographer Curt Fonger. He darted up a 40-foot saguaro, and there he stayed for the remainder of the day.

Curt Fonger and his wife Marta are living out their golden years on wilderness’ edge in Gold Canyon . With over 40 years of photography experience, Curt recently had a career-defining moment.

“I’ve never had the luxury of seeing a bobcat on top of a saguaro,” he says. “Just a beautiful creature, he was displaying himself proudly, kind of looking around, probably trying to see if mister mountain lion was still around… it was almost as if he was posing!

Curt says the golden cat with amber eyes stared back at him, perched on top of the cactus for hours. “He was pretty relaxed, he kind of lay on top of the saguaro, shut his eyes, almost as if he was sleeping.”

The bobcat eventually came down, but Curt and Marta are still riding high.

“It was that Kodak moment I think every photographer lives for.” 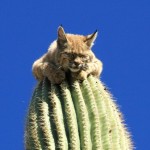 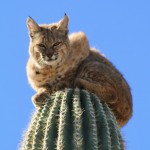 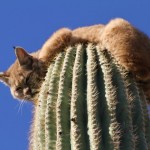 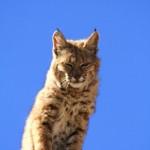 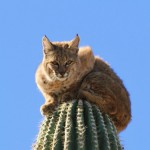 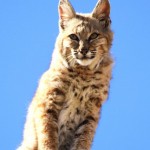 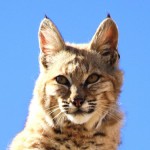 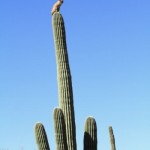