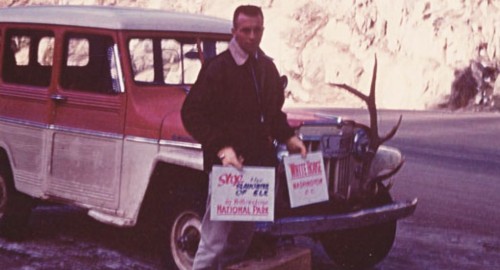 In 1961, Evel Knievel decided to hitchike from Butte, Montana to Washington D.C. in an effort to stop the culling of elk in Yellowstone National Park.  As a result of his efforts, (he hitchhiked with a 54-inch wide rack of elk antlers and a petition with 3,000 signatures) the slaughter was stopped.

Apparently, according to sportsillustrated.cnn.com, his story went something like this:

During this period, Knievel was also a guide and outfitter, operating what he called the Sur-kill Guide Service. In December 1961, to protest the proposed slaughter of rangeless elk in Yellowstone National Park, he set out from Butte on a widely publicized hitchhiking trip to Washington, D.C., lugging a set of elk horns that he had hopes of presenting to President Kennedy. “Boy, it was cold,” Knievel recalls. “Trucks would rush by and blow my suitcase and my horns right off the highway. On the way to see Mayor Daley in Chicago, I got the horns caught in a revolving door.”

Knievel made it to Washington in seven days and 27 rides but never met the President. Mike Manatos, Kennedy’s administrative assistant, accepted the horns, and Knievel was also received by Secretary Udall, to whom he pleaded his case. “I was wearing a pair of cowboy boots and carrying a briefcase that was empty,” he says. “There was nothing in it at all.” The day after the interview, the Department of the Interior agreed to have the elk trapped and transplanted to Montana, Wyoming and Idaho.