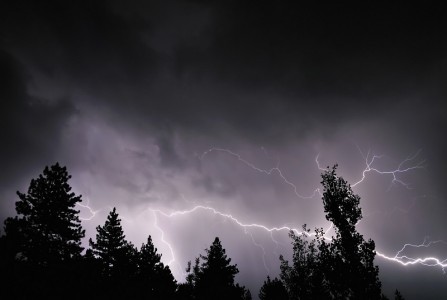 Lightning Strikes A Group Of Hikers In Glacier
By OutdoorAly

Stormy conditions were predicted for Western Montana Wednesday. High winds and even hail were included on weather reports, but hikers in Glacier National Park were not prepared for such an isolated convective storm to happen right over Saint Mary where they were hiking. The Missoulian reported three people, one of them a child, were apparently struck by lightning late Wednesday on the east side of Glacier National Park.

The group included a male and female, both 23 years old, and a child whose age and sex have not been provided so far.

The full story is at this link, here is part of what was reported:

Crews and employees from all corners of the park responded to the scene after an interpretive ranger called park dispatch at approximately 4:30 p.m. to report that a group of hikers was believed to have been hit by lightning on the St. Mary Falls Trail.

Located 10 1/2 miles west of the St. Mary entrance to the park, St. Mary Falls is less than a mile off of Going-to-the-Sun Road, making the trail an easy and popular hike for park visitors.

The three victims were about three-quarters of a mile from the trailhead. Germann said bystanders initiated CPR while park medics were flown to the scene.

Park employees and Glacier County sheriff’s personnel used stretchers to hand-carry all three to the trailhead near Going-to-the-Sun Road, where they were met by the helicopter and ambulance.

A thunderstorm, complete with high winds and low clouds and visibility, hit Great Falls early Wednesday evening according to the National Weather Service, and was likely the reason the Mercy Flight helicopter was unable to respond.