“Snake in the Grass” by Bruce Auchly-Montana FWP
By angelamontana 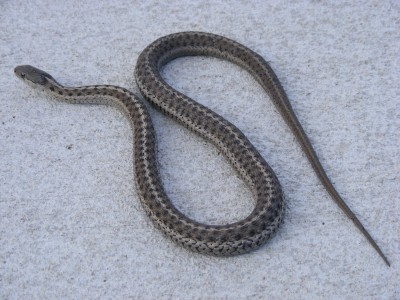 I have seen more snakes in and around the vegetable garden in the last week than I can ever remember. Garter snakes, mind you, but still snakes.

That’s too bad, though to a certain extent understandable. To some people there is something repulsive about an animal that slithers along the ground, unseen in tall grass.

And then there’s that whole Adam and Eve in the Garden, biblical thing. Didn’t that story end with no paradise on this planet for humans, and snakes condemned to crawl on their belly eating dust? Yuck.

Here’s the good news, snakes are among a gardener’s best friends. No, really.

Garter snakes will eat nearly anything. Near water that means frogs, tadpoles and fish. In my garden their menu runs to grasshoppers, beetles and small mammals; all pests I would gladly be rid of.

Montana hosts three species of garter snakes: Common, terrestrial and plains. All three are found in central Montana. All three have stripes that run the length of the body. Apparently they resembled garters when garters were in style.

The terrestrial garter snake is found border to border, west to east, north to south. It often, though not always, has three yellow stripes running the length of the body with a series of black spots between and on the stripes. If it hunts in my garden, however, I haven’t seen it.

My visitors are mostly plains garter snakes with the occasional common species. Plains garter snakes are the easiest to identify. They have an orange stripe that runs along its back flanked by greenish-yellow stripes on each side.

Plains garter snakes can run up to three feet long, maybe slightly longer. I found none that big. But 24 inches plus, yes.

The common garter snake has three yellow longitudinal stripes. They, too, can grow to 40 inches. That’s a big garter snake.

While garter snakes in the garden help rid it of pests, they have their predators, too. Raptors will drop from the sky like a bolt of lightning and make a meal of snake.

So in the big circle of life, snakes fill a niche, whether we like them or not.

Of course, not everyone is a snake lover, or even tolerates them. If that’s your mindset and you want to rid them from your property, then remove what makes them comfortable. Snakes in the summer need cover to escape the heat. Cover can be a pile of old boards or tall grass or a junk car. Clean up the lot, mow the grass short and your snake problem will likely disappear.

Oh yes, pigs are death on snakes. So maybe buy a pig.

But really, snakes can be our friends, even rattlesnakes, which are wonderful mousers. A rattlesnake in the field across the road eating mice? Fine, go for it.

But not in the front yard by the house. That has happened. One time, I scooped the reptile up with a shovel, put it in a cooler and took it down the road to a rocky cliff, where it lived to slither another day.

Then again, another time a rattler went to snake heaven.