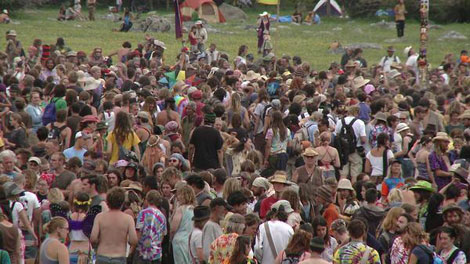 The Rainbow Fades As Gathering Dwindles To 6,000
By OutdoorAly

We previously reported on the 2013 National Rainbow Family of Living Light gathering in Montana, here is an update. The gathering has reached its last day of celebration, and the camp they set up in Beaverhead-Deerlodge national forest has dropped from 10,000 to 6,000 people. Many people from the gathering like to hang out in the area after the celebration, so be aware this area of forest may be occupied well into next week. Also roads exiting the area will have increased vehicle and pedestrian traffic. Daily updates can be found at www.fs.usda.gov/goto/r1/rfll.

The gathering had significantly fewer people attend than a previous celebration in the same location in 2000. The US Forest service is providing daily updates and put together this chart, they estimated only around 10,000 people attended this year. 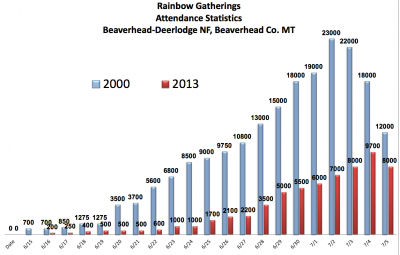 Volunteers from the Gathering will stay behind to clean up and rehabilitate the site with oversight by the U.S. Forest Service. Our Forest Service has done an excellent job of working to keep people informed and managing such a large group! Here is their frequently asked questions from USFS website: