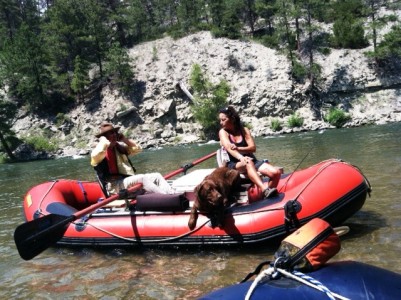 When All Hail Breaks Out: Brett French Radio Show Preview
By angelamontana 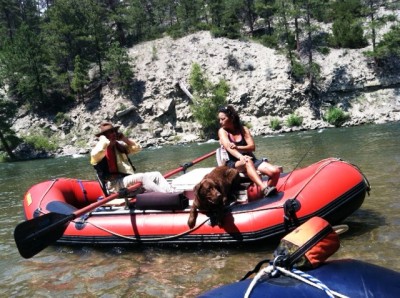 With the Fourth of July falling on a Thursday last week, it was the perfect opportunity to string together four days off and launch my old holey raft on several of Montana’s great waters. We started off with a float down the Stillwater River, from Jeffrey’s Landing to Columbus. The flow was perfect for some whitewater fun. I didn’t get a chance to wet a line, but the water is dropping fast and reports are that there is some good dry fly fishing at the upper end of the river.

While we were pulled over for lunch, another boat came down and asked if we had seen the raft that got wrapped around an upstream bridge abutment. The floaters that struck the bridge were floating behind us, so we didn’t see it, but I have seen other boats wrapped on the same abutment – just below a rapid known as Beartooth Drop. The best place to hit that rapid is on the far right. Those who take it in the middle are more likely to get pushed into the bridge where their boat can get pinned. Fortunately, no one was hurt.

The next day, we journeyed to the Paradise Valley. The weather was sketchy, with rain in the morning and a 30 percent chance of rain in the afternoon. Checking several forecasts, we decided to launch, hoping we would hit the ideal weather window. Unfortunately, about two-thirds of the way down it started raining. The rain wasn’t bad, we just donned our rain jackets. The air temperature stayed fairly warm. Then I started to notice large plops in the water and pointed them out, thinking they were extra large raindrops. Nope. It was hail. As the saying goes, all hail broke out. We beached the raft and rode out the storm under the protection of some cottonwood trees. The next two days featured similar drenching storms, with rain coming down so hard that drivers on the highway had to pull over to the side of the road. The rain has really muddied up the Yellowstone River, reportedly there were mudslides upstream causing the discoloration.

So remember, even though these summer days can start off sunny and warm, it’s always a good idea to be prepared for the worst.