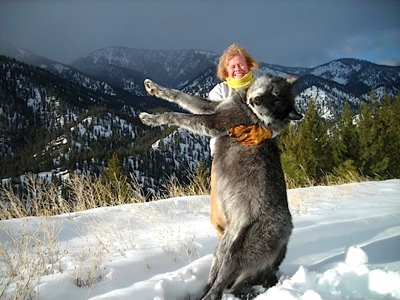 Compromise was the name of the game at the Fish and Wildlife Commission meeting in Helena Wednesday. The panel meeting, which was open to public comment, resulted in the decision for hunters and trappers to be allowed to use electronic calls and take up to five wolves in most areas of Montana during the 2013-14 season.

This will make next year’s wolf hunting season the most liberal in the state so far. Other limitations on the original wolf hunting proposals were tailored and cut back based on public comment. Most decisions will still be larger than last season. Ken McDonald, chief of the FWP Wildlife Bureau, was quoted saying they received 25,576 comments on the wolf season proposals. The majority of which were what he called “canned comments”, meaning it is the same content, sentiment and wording sent in by  at least 2,000 people.

Wolf species increased presence in Montana has drawn a segregated base of opinions since reintroduction in the 90’s. If you are from, live, hunt, or raise livestock in Montana, it is a hard subject to remain neutral on. Wolves have not been a natural dominant predator in our state for at least three decades.

The Smithsonian did an extensive article that covers a brief history of reintroduction:

The federal government began subsidizing wolf extermination on federal lands in 1915, and the last known wolf den in Yellowstone—prior to the wolf’s recent comeback—was destroyed in 1923. By the 1940s, the animals were extinct in the northern Rocky Mountains—shot, trapped or poisoned. (A few hundred remained in the United States, mostly in northern Minnesota, Wisconsin and Michigan.) Then, at the dawn of the modern conservation movement and “coinciding with the paving of America,” says Thomas McNamee, author of the 1997 book The Return of the Wolf to Yellowstone, the wolf emerged as a symbol of the nation’s vanishing wild heritage. It was among the first animals protected under the 1973 Endangered Species Act.

Some cuts to the initial proposal were based on comments such as one from Gail Richardson, a naturalist from Bozeman who was quoted as saying:

“It makes me ashamed to be a Montanan,” Richardson said. “I’m appalled that Montana hasn’t created buffer zones around the park. Those are not Montana wolves, but they are the American public’s wolves. They know no boundaries.”

According to FWP website: In 1995 and 1996, as part of its wolf recovery plan, USFWS trapped 66 wolves in southwestern Canada and transplanted them to Yellowstone National Park and central Idaho. The Canadian wolves seem to have “reintroduced” themselves quite well to the area, and now as an act of wildlife management, the Fish and Wildlife Commission has made an effort to balance things out as best they can between wildlife species and public concern. Hunters and trappers will only be allowed to one wolf per person taken just outside of Yellowstone National Park’s northern boundary, which will mean only a total of seven wolves to be harvested in that area.

Here is a rundown of regulations and changes:

-Hunters and trappers are limited to one wolf per person taken just outside of Yellowstone National Park’s northern boundary, allowing only a total of seven wolves to be harvested in that area.

-Rifle hunting season will be from Sept. 15 to March 31, 2014 based on public comment regarding pregnant or lactating females.

-Another change this year includes a higher pan tension on wolf traps in regions 1 to 5 to minimize the take of lynx, wolverine and other non-target species.

Last year, 128 hunters and 97 trappers harvested wolves; they were limited to one for most of the season. Another 108 wolves were removed for livestock predation, accidents or other causes.