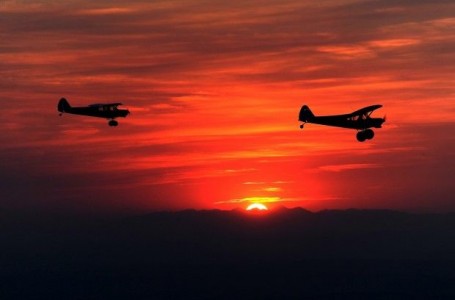 Two men on horseback scouting a herd of elk for the upcoming hunting season in Wyoming saw a small plane go down around 6 p.m. Tuesday. The Wyoming men acted quickly, one of them calling the sheriff’s office to report the plane crash, the other riding towards the crash site near Meeteetse, Wyo.

The plane was being flown by 17-year-old McKenzie Morgan who was flying solo in a Cessna 172 on a multi-city-training flight out of Laurel, Mont. She had survived the crash nearly unharmed and was able to walk a short way from the plane when she was met by one of the hunters, Joshua Alexander, 27, a Douglas Wyo., resident.

Alexander put her on his horse and took her out of the rugged area of the Shoshone Mountain range to rescue teams who were preparing to search for her.

The solo cross-country flight was planned to make stops in Powell, Cody and Greybull in Wyoming and Fort Smith and Billings in Montana before returning to Laurel. According to a news release from Park County, Wyo., Morgan became confused and got going in the wrong direction after taking off from Greybull, Wyo.

“Ms. Morgan was one lucky young lady,” said Deputy Hayes Randol. “If it had not been for these two hunters being in the right place at the right time, she may still be out there. We’re all extremely relieved that this potentially tragic situation had the best possible outcome.”

The story reported in the Billings Gazette didn’t include the first name of the hunter that called authorities, they did include that he was a 26-year-old Casper, Wyo., man by the last name Coil.