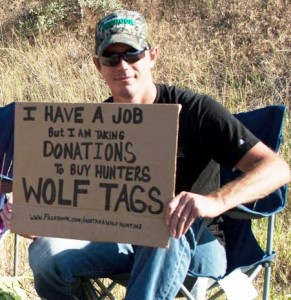 The topic of wolves gets Jason Maxwell, along with many other Montana residents, riled up more than anything these days.  Jason, a Montana native, is a hard-core advocate for wolf hunting in Montana, he and a couple of other wolf hunters even went so far as to create a Facebook page called Montana Wolf Hunting, which has a current following of just under 2,000 fans.  Among the posts on the Facebook page, you will find information ranging from recent wolf sightings in Montana to up-to-date statistical information and the most recent wolf trapping certification class schedules.

Wolves weren’t always an issue for Jason, as he was born and raised in the Bitterroot valley, and seeing elk in the mountains was not uncommon back in the day.  Elk were once thriving in all of western Montana, especially in the Bitterroot valley, and Jason remembers seeing herds of hundreds of elk as a small child while out in the mountains with his mother, father and grandfather.  Now, as a 34 year-old, the only elk he sees, aside from the elk grazing on private ranches eating food that ranchers grow for their cattle, are mostly dead bull elk that bled to death, left to rot, or at least a dozen cow elk with fetuses ripped from their bodies after being taken down by wolves–the rest of the meat being untouched.  One thing there is no shortage of in the Bitterroot are wolves and wolf sign.  As a matter of fact, there are so many wolf tracks and so few tracks from elk, Jason is now on a mission to help save the elk by hunting the sport-killers that have no predators, outside of man, as they have multiplied beyond the capacity expected.

With the 2013-2014 Montana wolf hunting season being extended and the total bag limit increasing to five wolves per hunter/trapper, Jason is now on a mission to help Montana wolf hunters that might not be able to afford their tags, pay for their tags.  With as many opportunistic wolf kills that there were during the 2012-2013 wolf hunting season, Jason hopes that hunters will take advantage of the 5-tag bag limit for this year’s wolf season and not go out with the attitude of “if I see one, I’ll shoot it”.  Jason believes that if hunters hunt wolves with the same passion they hunt deer and elk, Montana might be able to get the wolf population under control. So, he is hoping this is incentive for wolf hunters that might not have the money to pay for five tags.  Ethical hunting is important to Jason, and he would rather see wolf hunters legally filling wolf tags over illegally poaching any animal.

On August 7, 2013, Jason Maxwell and another member of the Montana Wolf Hunting & Trapping group grabbed a Sharpie and wrote a message on a piece of cardboard, reading “I have a job, but I am taking donations to buy hunters wolf tags”.  The makeshift sign also included the Montana Wolf Hunting Facebook page address at the bottom (www.facebook.com/montanawolfhunting).  “We want to help hunters do their part and eradicate these non-native Canadian grey wolves that were introduced to this area and get our elk and deer populations back to where they should be.  It is all about balance, and as long as these killing machines are here, there is no balance.”  The two did manage to collect $130.00 in the hour and-a-half they were out yesterday, and they plan to continue accepting donations to help wolf hunters purchase their total number of allowed tags until the beginning of the archery-only wolf season on September 7th.  They were joined by other supporters of wolf management, too.

According to Jason, there will be drawings for wolf hunters on the Montana Wolf Hunting Facebook page for anybody interested in having their wolf hunting license fees covered.