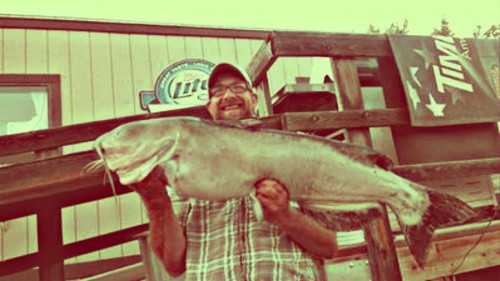 It may be hot and because of the heat the fishing in many rivers around West and Central Montana has been effective by the Hoot Owl restrictions Montana Fish Wildlife and Parks put into place last week, but despite the slowdown in river fishing there is still a lot of fishing news to report. 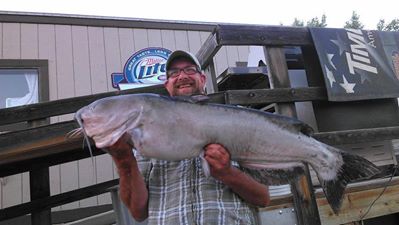 First of all it appears that Montana will have a new channel catfish state record soon. Saturday Dan Davenport was fishing in Snow Creek bay on Fort Peck Reservoir and he hooked into a monster fish. Davenport ,who was targeting walleye, was using a 1/8 ounce jig with 8 pound test line when the giant “cat” decided that he might like what Davenport was offering. Turns out the channel catfish which weighed 34 pounds 8 ounces and was over 41 inches long will be a state record if those statistics hold up. The FWP office in Miles City as of Monday had not verified that Davenports catfish was a new state record.. A picture of the 34 pound catfish may be viewed on montanaoutdoor.com. Clint Thomas owner of Hell Creek Marina told me that the fish measured 13 inches between its eyes. Now that is a big fish! The current Montana state record channel catfish was caught May 8 2009 and weighed 30.12 pounds and was 37.5 inches long. That catfish was also caught on the Missouri River but by the Fred Robinson Bridge by Jessey Perry.

The Tiber Walleye Tournament took place last weekend and the fishing was great according to Tournament Director Dale Gilbert. The winning team of Gordy and Tanya Matson from Ennis, MT had a 2nd day total of 26 pounds and an overall total of 43.52 pounds with 10 fish to win the event. Second place was the team of Jack Schilla of Valier and Leonard Bauer of Aitken, MN, they caught 35.9 pounds of fish for the two days. The fishing at Tiber Dam has improved over the last few years with bigger fish being caught. Over the life of the event, there were only 4 years in its history that 25 pounds of fish didn’t win the event. This year, 25 pounds didn’t even put you in the money. 105 two person teams competed in this years tourney.

Fishing for Lake Trout on Flathead Lake is hot right now. Here is Bob Orsua’s report from Mo Fisch harters “The fishing on Flathead is in full summer mode. The runoff has ended and the water has cleared. Most of the fishing is being done around the delta area, which is west and east of the river mouth. The fish are staged at the edge of the drop off as the shallows drop into the deeper water around the delta.”

Finally Shooters Saturday will take place this Saturday 10am-4pm at Deer Creek Shooting Range. Its a fun way to support Buck up for Wounded Warriors and try out different firearms. See Bob Wards in Missoula for all the details

(Written by the Captain; Photo courtesy of Tyler George)