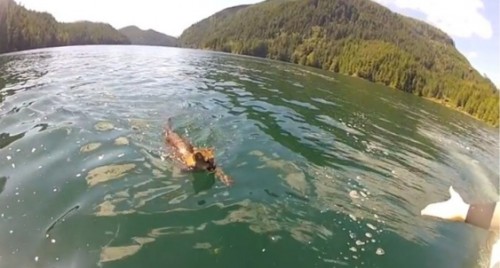 Rare Video of Cougar Swimming After Angler’s Boat
By OutdoorAly

Better watch your catch next time you are fishing around cougar territory. Apparently, although it isn’t common to see, these critters can swim quite well and could come after your catch. That was the case for one angler who caught a cougar on camera swimming after his boat on a Vancouver Island fishing trip.

Fishing guide Graham Nielsen, who operates Nielsen’s Lodge in Tahsis, was taking three fishing guests back after catching four halibut and three salmon when they spotted the animal between Nootka Island and Vancouver Island, The Times-Colonist reported.

“Everyone figured it was probably an otter, but I thought I saw ears and that it was doing a doggy-paddle,” Todd Culos, who posted the video to YouTube, told The Toronto Star.

He added—and the video reveals—that the cougar seemed intent on climbing onto his 24-foot boat, which held three passengers and their impressive haul of halibut and salmon.

The cougar was not quite full grown, but around 10 feet, nose to tail. Nielsen said it was moving real fast, and swam nearly halfway across the two islands-about a quarter mile.“I have no doubt it would have tried to climb onto the motor pod, given an opportunity.”

Danielle Thompson of Parks Canada said that while it’s rare to see cougars swimming—they’re nocturnal predators and tend to avoid humans—they’re prolific water travelers. The animals will often swim between islands to hunt.

This is useful information if you ever encounter a cougar in the water; it is better to stand your ground than try to escape the cat by swimming away.

Todd Culos captured this video of a cougar swimming behind a boat near Tahsis on July 15.  Feature photograph by: Todd Culos