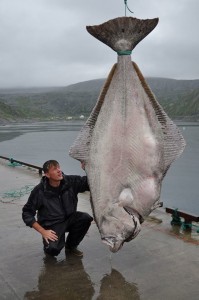 Marco Liebenow was fishing with three friends in a 19-foot boat in Norwegian waters last month when he hooked what he thought was “a submarine,” according to report in the UK Daily Mail. The halibut weighed in at 515 pounds and may be the largest caught yet. The current record stands at459 pounds for Pacific halibut (Alaska, 1996) and 418 pounds for Atlantic halibut(Norway, 2004), according to the International Game Fishing Association. Liebenow has reportedly contacted the IGFA, but is still waiting on the association’s approval

After a 90-minute battle, Liebenow managed to reel the fish to the surface. But once the fishermen saw how big it was, they realized the fish was too big to haul into the small boat. So they tied a rope around its tail.

“The flounder could be towed only with the greatest effort and with great sensitivity to the port,” fishing tour company Angelreisen Hamburg explained (via translation) on its Facebook page.

At the dock, the fish was hoisted out of the water by crane and weighed. After photos, Liebenow donated the fish to a local fish dealer, and then celebrated his catch with a few beers.

“[Marco] does not speak any English but has said it was a wonderful feeling to catch it and has called it a fish of a lifetime,” David Bottcher, Angelreisen Hamburg fishing tours spokesman who arranged the trip, told the Daily Mail. “Before he left for the trip, he called us first to ask for a few hints about how and where to fish—I guess our advice paid off.”