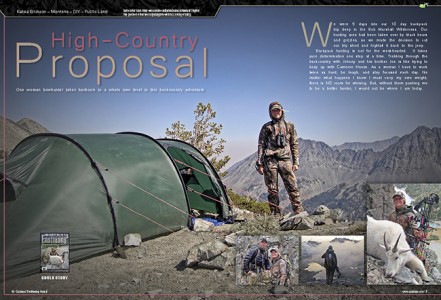 Helena Bowhunter Bags a Billy, a Boy, and Cover of Eastmans’ Bowhunting Journal.
By OutdoorAly

Check out the latest Eastmans’ Bowhunting Journal and you will notice something different than the any of the previous issues. Kelsie Erickson is the first camouflage girl to make the magazine’s cover. And after reading about her backcountry hunting adventure and seeing the photos, it’s no surprise why they came to her.

In the article Erickson recounts when she bagged her billy with a bow in the Crazy Mountains last fall on her first goat hunt. It was way in the backcountry and although she hoped the highlight of the trip would be taking home a trophy, her long-time boyfriend had other plans. He planned to propose on the trip since he knew they would be at the top of the world with beautiful views. And propose he did, right after Erickson got her goat! Here is some of the article:

As we listened to all the sounds of nature I glimpsed movement to my right. I turned around and I could see with my naked eye a glowing white beast coming around the mountainside. We watched as the goat slowly made his way toward us. It was apparent that there were no other goats with this goat, so there was a 99% chance it was a billy!

There was no cover between us so without a way to stalk we had to sit and wait. We waited for hours before he literally fed to the edge of the cliff 300 yards away. I thought he would go over, but he knelt down and laid there staring in our direction… Read more of the story here.

“Eastmans’ saw my photo on Facebook and they called,” Kelsie said in a recent Independent Record article.

“The photo, the setup, the trophy and the background are what our magazine is all about. The photo speaks to our audience and the backcountry hunter,” Guy Eastman wrote in an email to the Independent Record. “Tough backcountry bowhunting is not just a guy’s sport. We are seeing a very large influx of women into the sport over the past five years, which is great news for the sport in general…Read more from that story here.