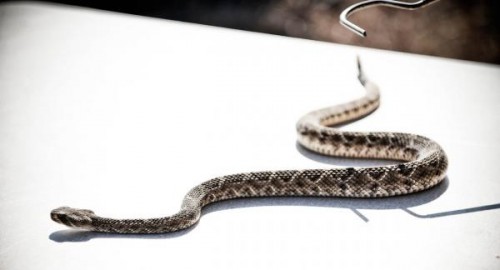 A Livingston woman recently came across a poisonous rattlesnake sitting on the kitchen table in a house she was looking after! She heard a rattle, and as soon as she realized that it was coming from the snake she called authorities. They killed the snake and experts in the area say it was exhibiting unusual behavior. Read the full story from Billings Gazette here.

A Bear Steals Blankets From Cabin, Then Hibernates in Crawl Space– 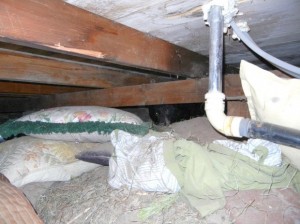 photo courtesy cabin owner via Missoulian shows blankets and pillows the bear collected from the cabin before dragging them into the crawl space to hibernate.

The story sounds like something straight out of “Goldilocks and the Three Bears,” only this time the roles were reversed. Humans came home to find a bear sleeping in their crawlspace. The kicker is he had gone through their home and stolen all their bedding to cozy up his den for the winter. It was later reported that the homeowner waited to return to the cabin until it was confirmed by FWP that the hibernation period had concluded and the bear was gone. read full Billings Gazette story here

We reported on this story earlier this spring where residents of the Deer Creek area near Missoula found a surprise in their pool one morning; a baby moose. The poor guy couldn’t get out even after multiple attempts, and mama looked on helpless in the situation. FWP came to the rescue; read our coverage of the story here.

The Bear and the Trampoline

This video is an old one from around 10 years ago, but it is still surfacing around the Internet. A black bear was treed in the University of Montana neighborhood in Missoula. FWP got creative about how to safely get the bear down, and used a neighbor’s trampoline to catch the bear after they had tranquilized it. The animal looks like he had a hard landing after the initial bounce, but much better than having to be euthanized. This video went viral and drew national attention as you can see from the video clip.

Living in Montana amongst so much wildlife sure can make life interesting sometimes!